Forests are an extremely important part of Myanmar’s natural resources. However, competing economic interests have resulted in the country having one of the highest rates of deforestation in the world. 1 The state owns all land and forest in Myanmar 2, but external business interests are increasing. Local communities and ethnic minorities have traditional and legal interests as well. 3 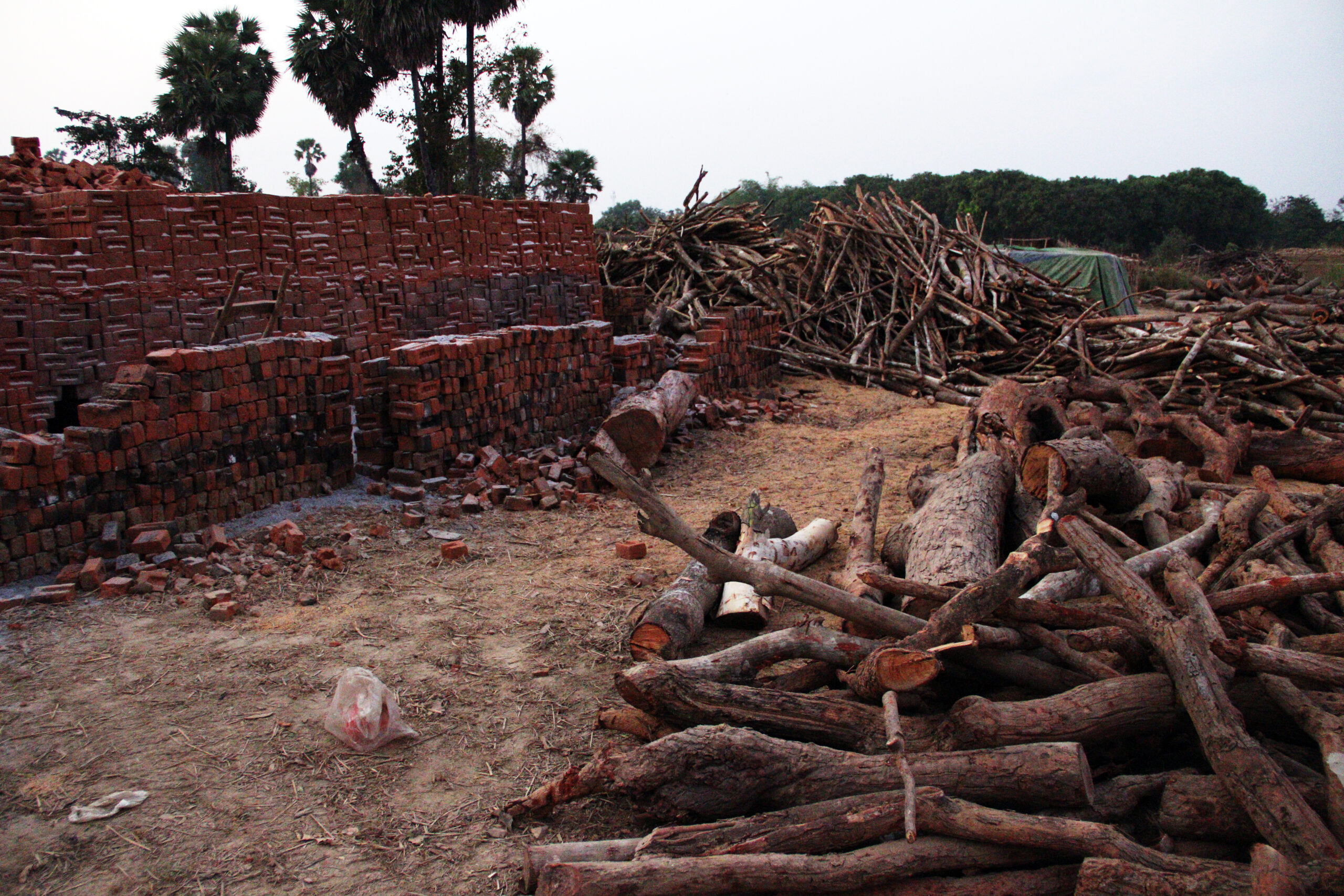 Forest management has been on the state agenda since colonial times. 4 However, since at least the 1970s there has been a greater understanding of the role of conflict, land concessions, and illegal and unsustainable timber harvesting in deforestation. 5 While the state has developed policies and legislation on forest conservation, including community forestry, external actors have increasingly focused on the role of the state itself in perpetuating unsustainable and illegal logging practices. External mechanisms for changing the sector have typically focused on economic sanctions, particularly to limit the role of forestry in funding the military. 6, 7 However, critics suggest that this may actually increase deforestation and illegal logging in Myanmar. 8 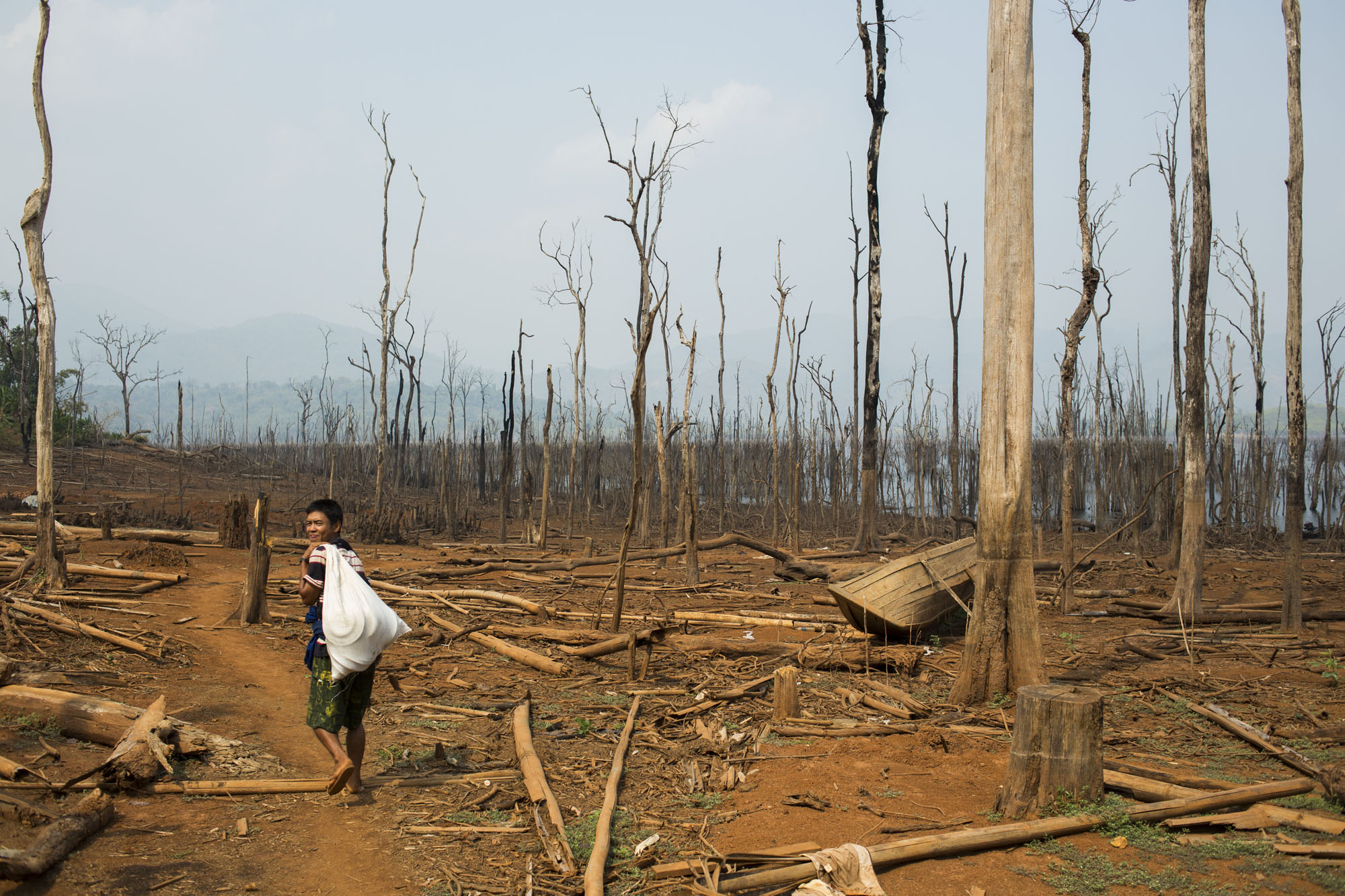 Rubber and palm oil plantations or the mining sector impact at conflict areas which have displaced villages like Kan Par Ni in Myanmar. Photo by NFNPA via Flickr, Licensed under CC BY-SA 2.0

Myanmar’s forests are governed by many different policies, laws, and regulations. The full list can be viewed on the Forest Policy and Administration page. 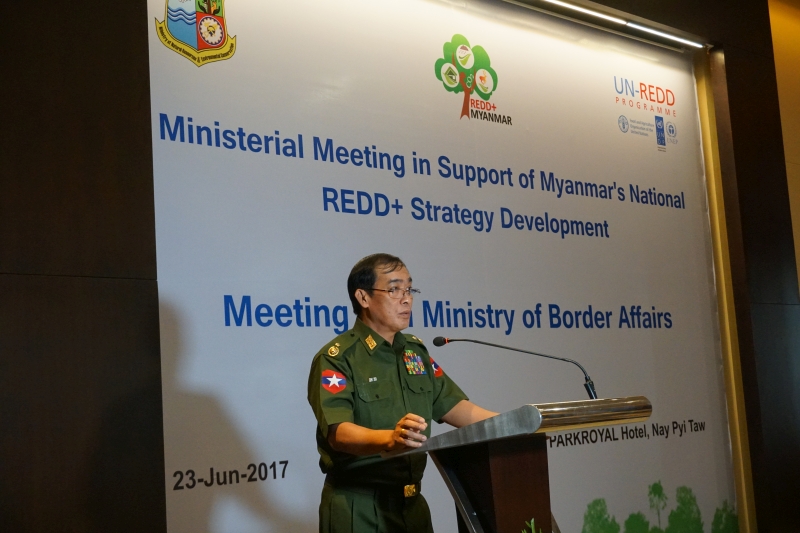 The Forest Department under the Ministry of Natural Resources and Environmental Conservation (MONREC) is the main government institution responsible for forestry management. However, other departments under MONREC are also responsible for forests, as is the Ministry of Agriculture, Livestock and Irrigation. A recent statement 9 by the military-appointed minister of MONREC indicates forest management, including timber exportation, is now under the control of the military junta. More can be read about government administration on the Forest Policy and Administration page.

A 30-year National Forestry Master Plan (NFMP) (2001/2–2030/1), developed by the Forest Department, guides the development of 10-year forest management plans. Using so-called ‘wasteland’, much of which is likely to be land under customary tenure, 10 the aim is to increase Reserved Forest (RF) and Protected Public Forest (PPF) by roughly 4 million hectares. 11 More can be read about the forest classification system on the Forest Policy and Administration page.

The 2015 civilian government endorsed the 2030 Agenda for Sustainable Development. 12 Participation in climate change-related REDD+ and making Nationally Determined Contributions as a party to the UNFCCC were also part of the strategy. Forests are a key aspect of these climate change programs. The government also endorsed the Myanmar Climate Change Policy (2019), National Environmental Policy (2019), and the Myanmar Climate Change Strategy (2018-2030). 13

Prior to the 2021 military coup, more than 45 NGOs and civil society organizations (CSOs) were working on environmental conservation in Myanmar. 14 Forest-specific organizations include the Center for People and Forests (RECOFTC), Myanmar Environment Rehabilitation-conservation Network (MERN), Karen Environmental and Social Action Network (KESAN), and Kachin Development Networking Group (KDNG). RECOFTC and MERN have also collaborated with the government to promote forest protection and reforestation. 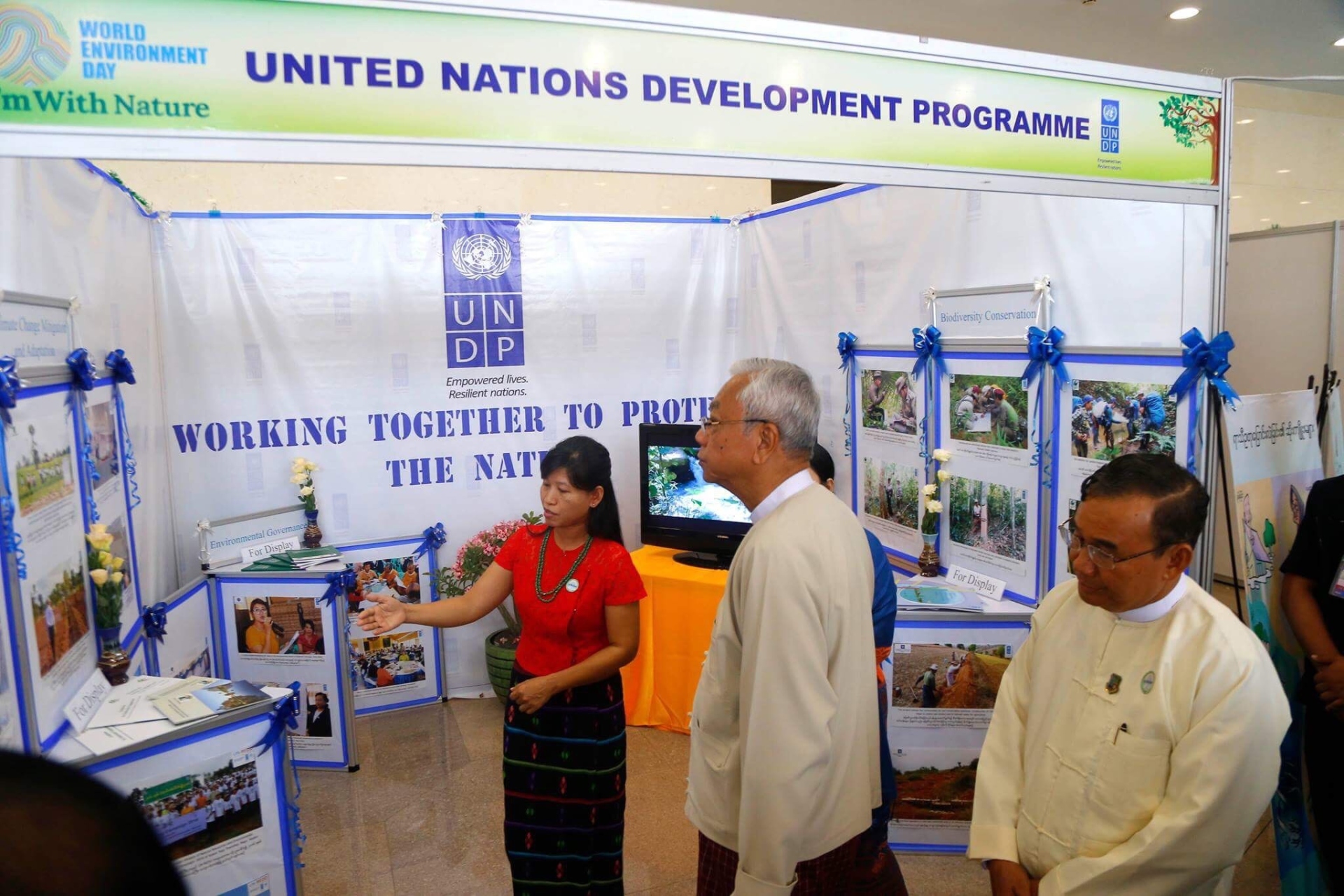 World Environment Day cerebration at the Nay Pyi Taw, Yangon, in 2017. Photo by Photo by REDD Plus Myanmar via Flickr, Licensed under CC BY-SA 2.0

Local communities of ethnic minorities16 play a fundamental role in caring for forests. 70% of Myanmar’s population live in rural areas, relying on forests for basic needs. 17 Most rural villages are made up of ethnic minorities or Indigenous Peoples, who also have spiritual and familial ties to forests. These roots of customary tenure, along with customary practices and traditional knowledge, guide their approach to forest governance. 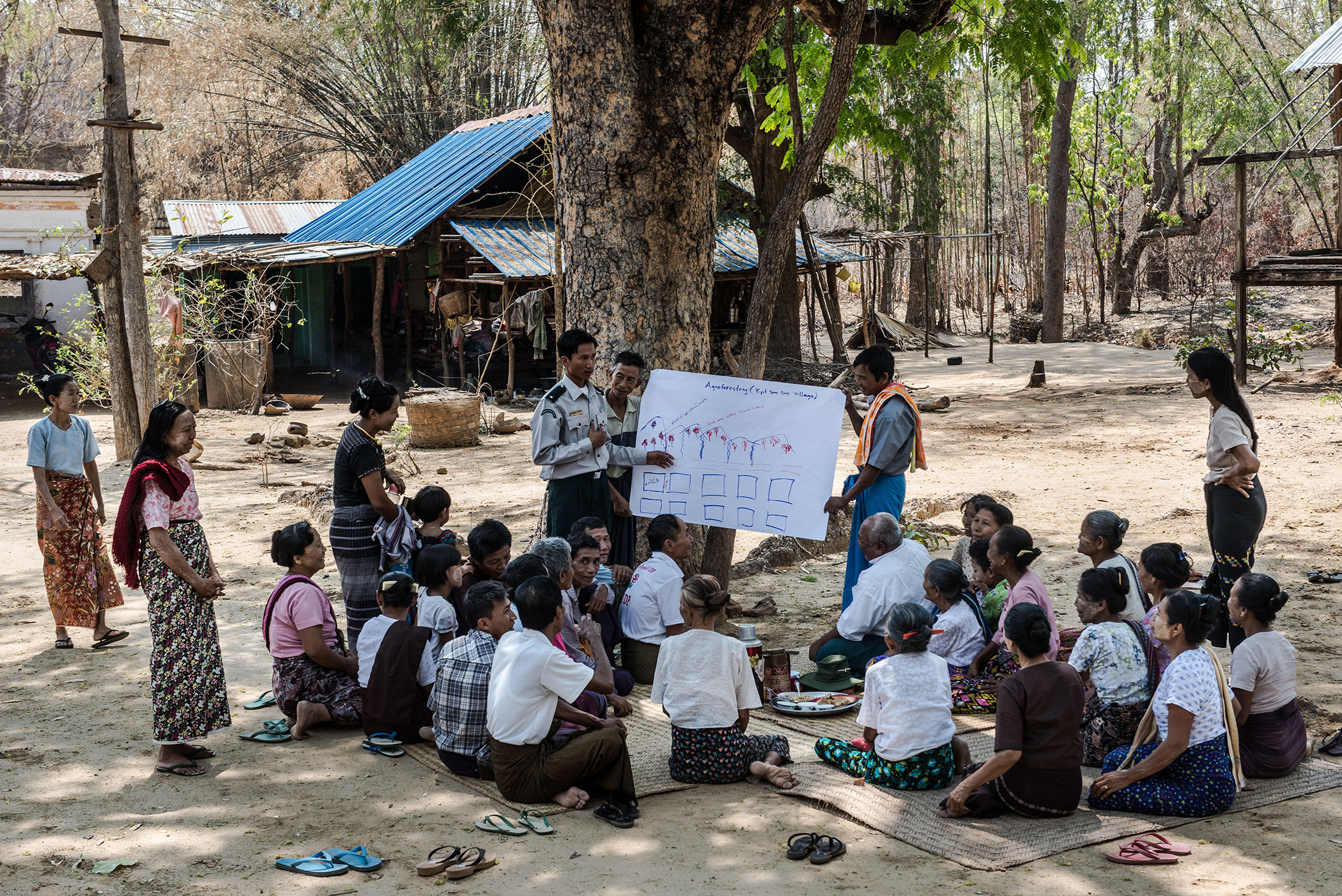 Outreach meetings between MONREC and CF for the Agroforest project at the Kyit Some Swe village Photo by FLEGT Myanmar via Flickr, Licensed under CC BY-SA 2.0

Customary land tenure is not yet legally recognized in Myanmar. However, the National Land Use Policy (2016) includes principles on managing and recognizing customary tenure, including suggested protection under the draft Land Law. 18 19 The government also allows for limited expressions of customary land tenure in practice. 20

Local communities continue to take care of their traditional sacred forests. In some cases, this has led to the creation of protected forest areas that do not fall under the national legal framework. 21 This has especially been the case in non-state administered areas (NSAs), with a well-known example being Kaw, or the Salween Peace Park. The park was established by a group of Karen on their customary land to protect their cultural heritage and autonomy. 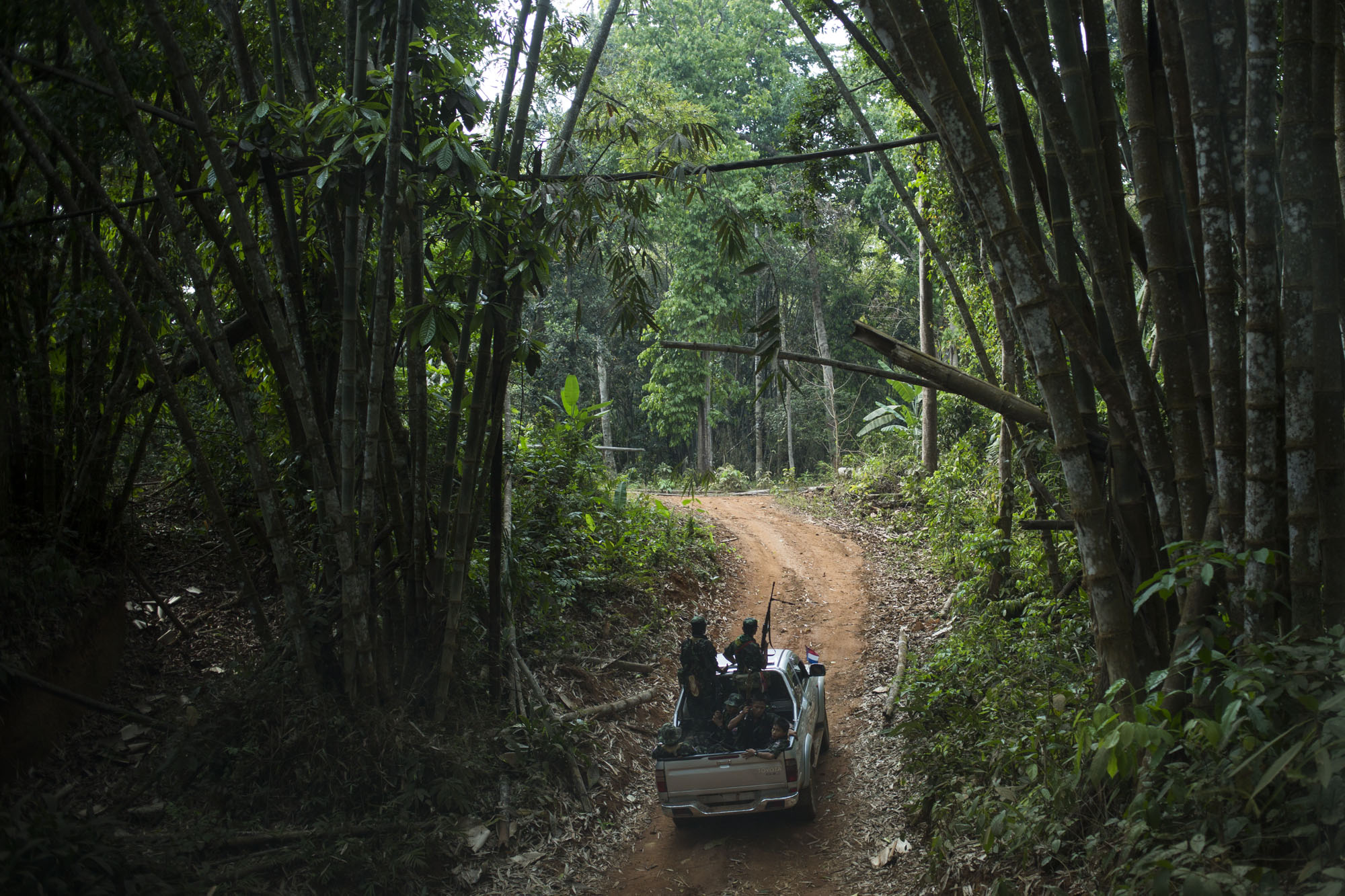 NSA forest actors need to register with both the NSA and national authorities. 22 However, it is unclear from which authority a NSA forest actor should apply for a forest certificate. 23 This means each NSA forest is recognized differently by the national government. Kaw has a long-term lease with the national government but has received its internationally recognized certification from the Karen Forest Department. 24 Other forests cared for by communities in NSAs in Karenni, Kachin, Karen State, 25 and Tanintharyi Region26 have also applied their customary laws, governance systems, knowledge, and practices toward forest management. 27 In addition to Kaw, the Thawthi Taw-Oo Indigenous Park was established in 2019. 28

Community-protected forests in NSAs often have competing interests. 29 For instance, the 2019 Community Forest Instructions (CFI) limits ethnic governance in forest management. 30 In addition, various laws relevant to forests are at odds with each other and with community-driven forest protection. For example, the Vacant, Fallow and Virgin Land Management Law, discourages shifting cultivation, a usual technique of ethnic communities. Ultimately, all forests, including ones in NSAs, remain under the Myanmar constitution. These areas are called “mixed control”. See map 1. 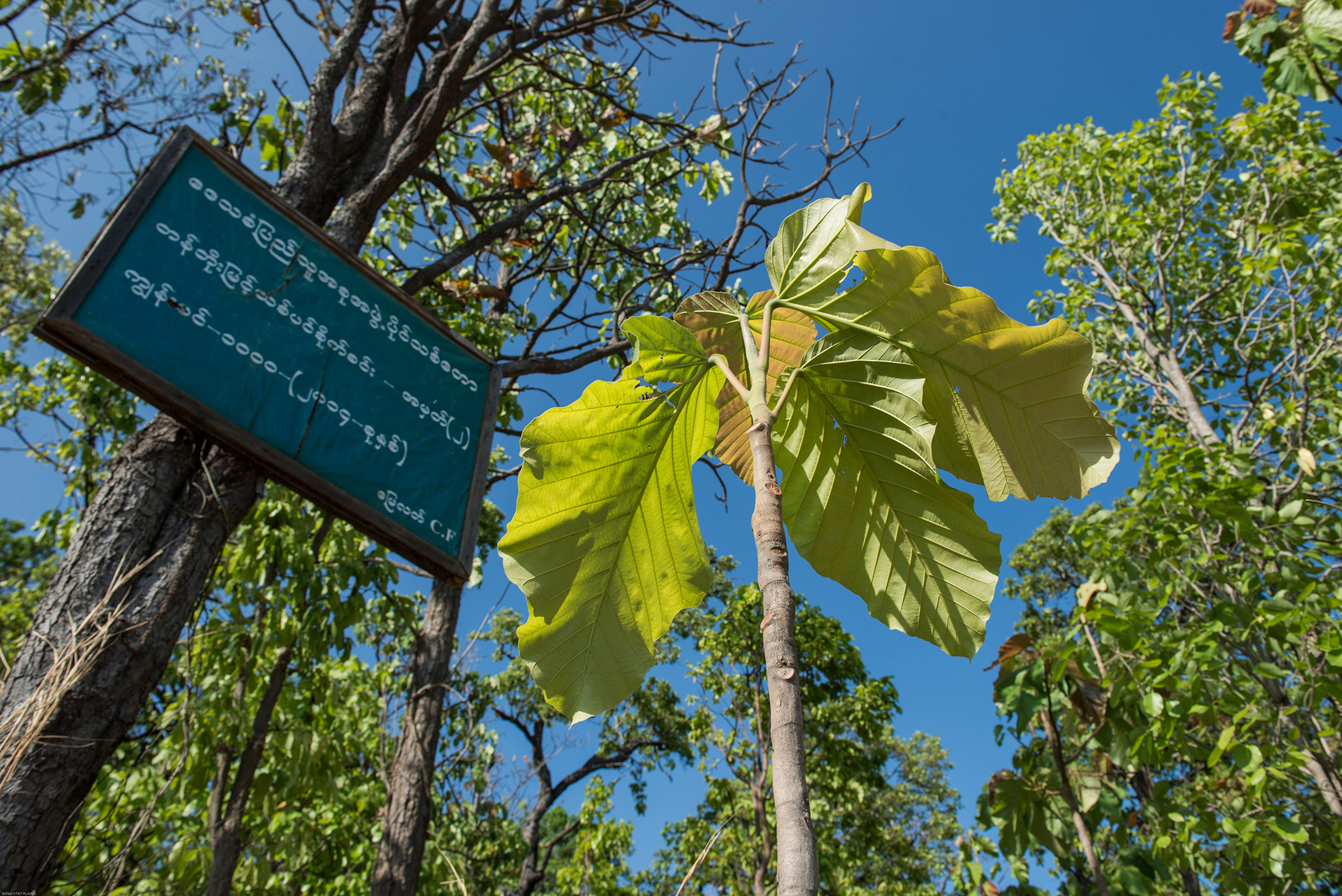 Teak’s plantation yard in the community forest. Photo by Photo by FLEGT Myanmar via Flickr, Licensed under CC BY-SA 2.0

The national CF framework is guided by the Forestry Master Plan (2001-2031), Forest Law (2018), and the Conservation of Biodiversity and Protected Areas Law (2018) and implemented through the Community Forest Instructions (CFIs) 1995, 2016, and 2019. 31Unlike community-driven forest conservation, nationally-driven Community Forests require applicants to register with the national government for a certificate. Once a CF certificate is received, registered users can develop Community Forestry Enterprises (CFEs) and Community Forest User Groups (CFUGs). 32 Through these, registered communities may sell forest products while supporting the regeneration of degraded forests for 30-year periods that can be extended. 33 State-recognized CF has more economic opportunities than NSA forests, as the state provides enterprise training and financial support to CFEs and CFUGs, and CFEs can sell teak and ironwood legally. 34 CF can be found in areas with long-term forest degradation, 35 including Shan, Mandalay, Magway, Sagain, Tanintharyi, Kachin, Mandalay, Rakhine and Ayeyarwady. 920,000 ha of state-supported Community Forests is supposed to be established by 2030,36 but only 248,967 ha of Community Forests had been established by 2019. 37

Women’s roles in forestry are diverse across Myanmar due to the diversity of cultural traditions and changes in the way people make a living as commercialization increases. In general, rural women tend to engage with forests for domestic needs, such as gathering firewood, vegetables, and food. 38 Women in Myanmar also hold knowledge on forest protection, developed by growing seeds and plants and caring for native species. 39 In contrast, men interact with forests but are more likely to focus on extraction than conservation. 40 In some communities, like the Karen, women may be the only holders of specialized knowledge of certain plants and herbs. 41 In addition, in some forests, women play a more central role in forest management, such as at Kaw. 42 Yet, overall, males mostly dominate in decision-making in community-driven forests. 43 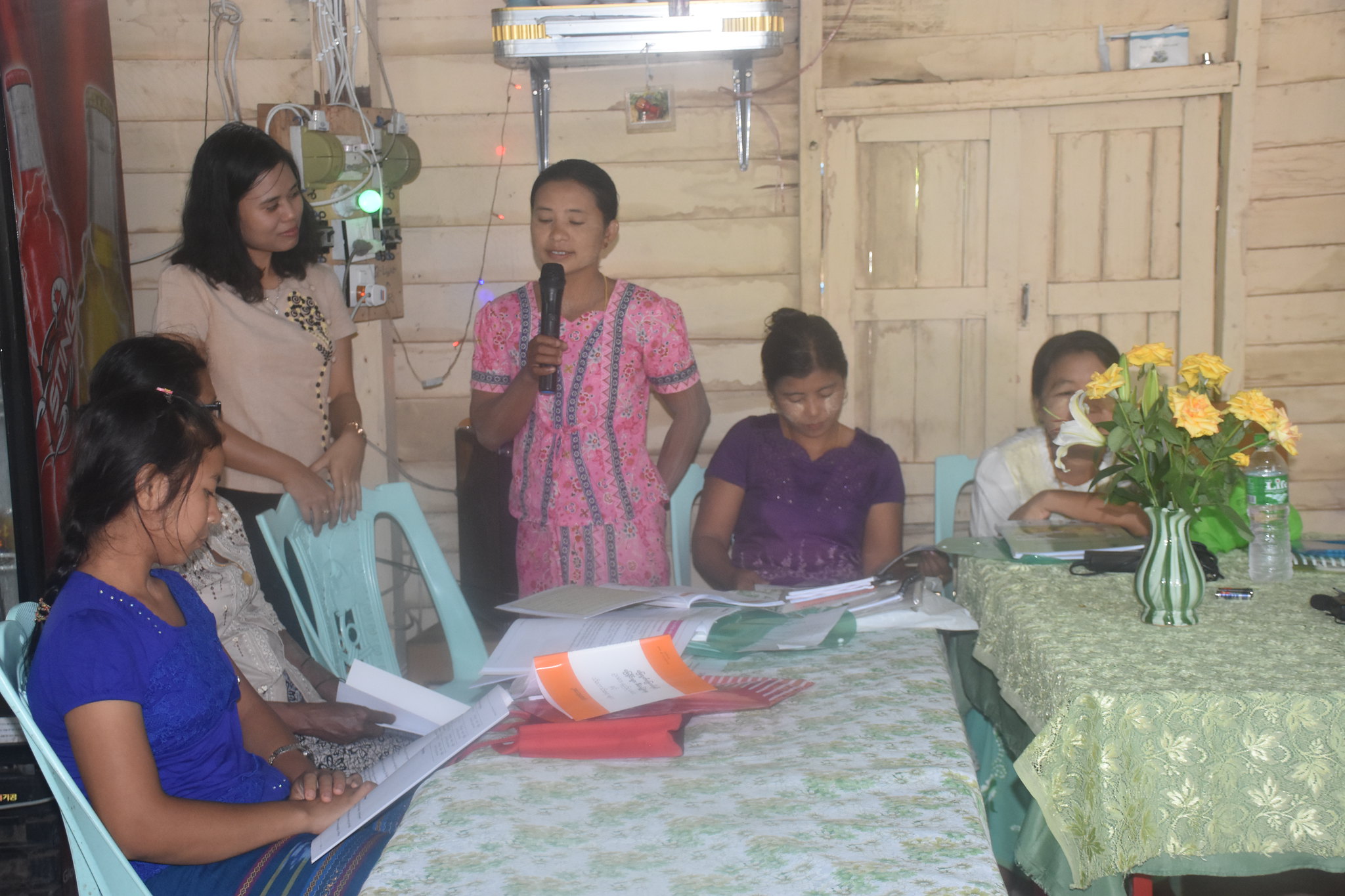 Women participation at the land tenure training at the MinHla Township, Bago Region. Photo by USAID via Flickr, Licensed under CC BY-SA 2.0

Like women elsewhere, ethnic minority women encounter additional barriers to participation in forest governance. They are typically required to do domestic work alongside their farming and livelihood activities, restricting the amount of time they can devote to forest management discussions. 44 Cultural norms requiring women to have an escort impact the mobility of women as well, and remote forest areas – considered unsafe for women and girls – can require an overnight stay to access. 45 Further, women are told to stay at home to avoid the risk of sexual violence in mixed control areas where some non-state community forests are located. 46 Furthermore, ethnic women live in remote rural areas, which have particularly limited access to education. This has weakened their ability to participate in both forest governance and implementation activities. 47 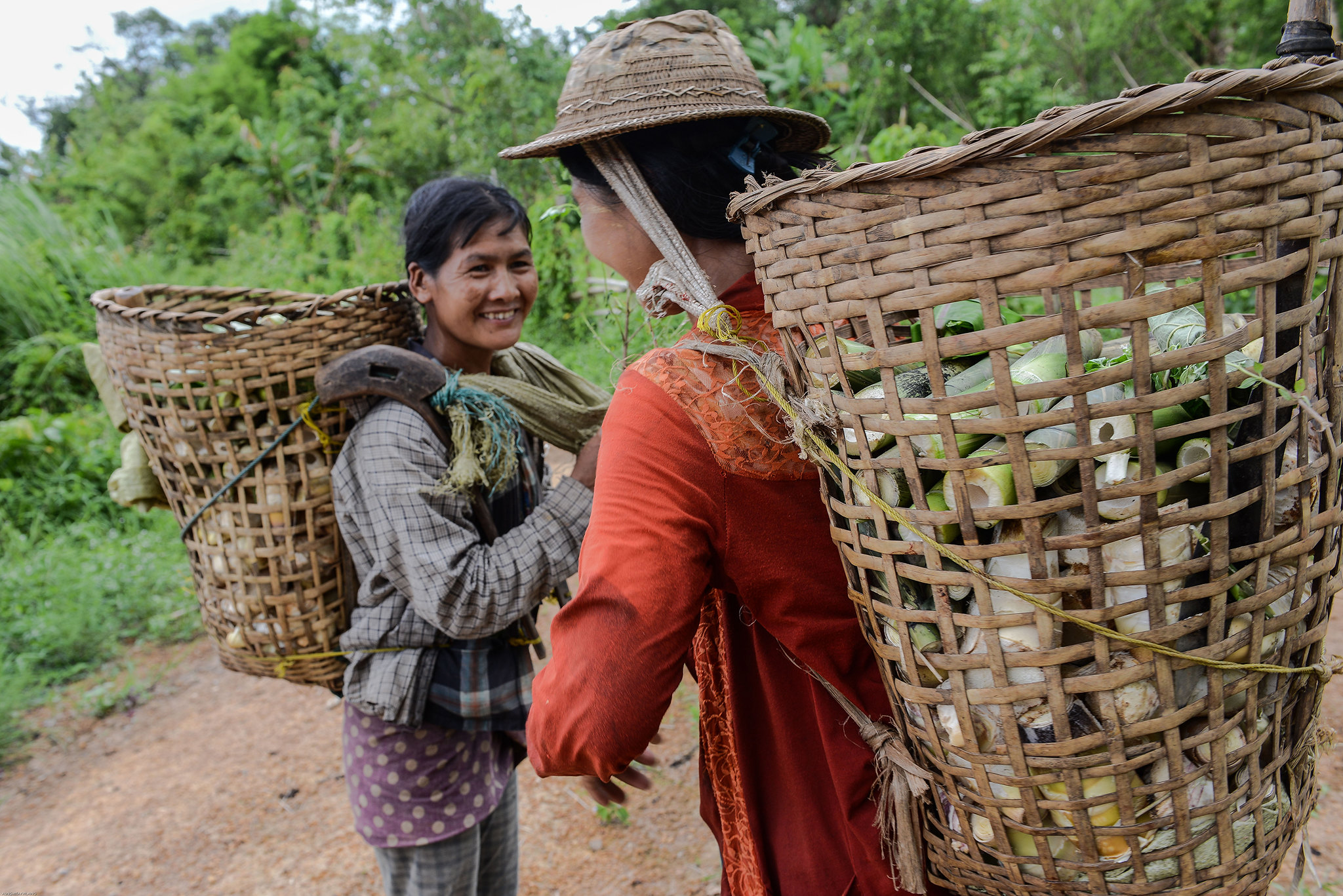 Rural women gathering vegetables and food from the forest. Photo by FLEGT Myanmar via Flickr, Licensed under CC BY-SA 2.0

Since the military coup in February 2021, forest areas have also become dangerous for people to enter. Communities, especially women, are less mobile due to increased safety concerns, further limiting their ability to care for their forests and to access resources. 48 49

Like in NSA forests, women are under-represented in CF. Formal education is a key criterion for CF governance structures, but since rural women are less able to access education opportunities, they are also less likely to be literate in Burmese. Thus, they are unable to meet the legally prescribed education requirements for participation in spite of having a strong knowledge of forestry. Opportunities for input are male-dominated, which can be intimidating and may feel unsafe for women to discuss the issues. Further, with an unquestioned requirement to do domestic work, combined with low awareness of rights, and a male-dominated culture forbidding women’s participation, 50 gender inclusiveness in state-governed CF has been very limited. 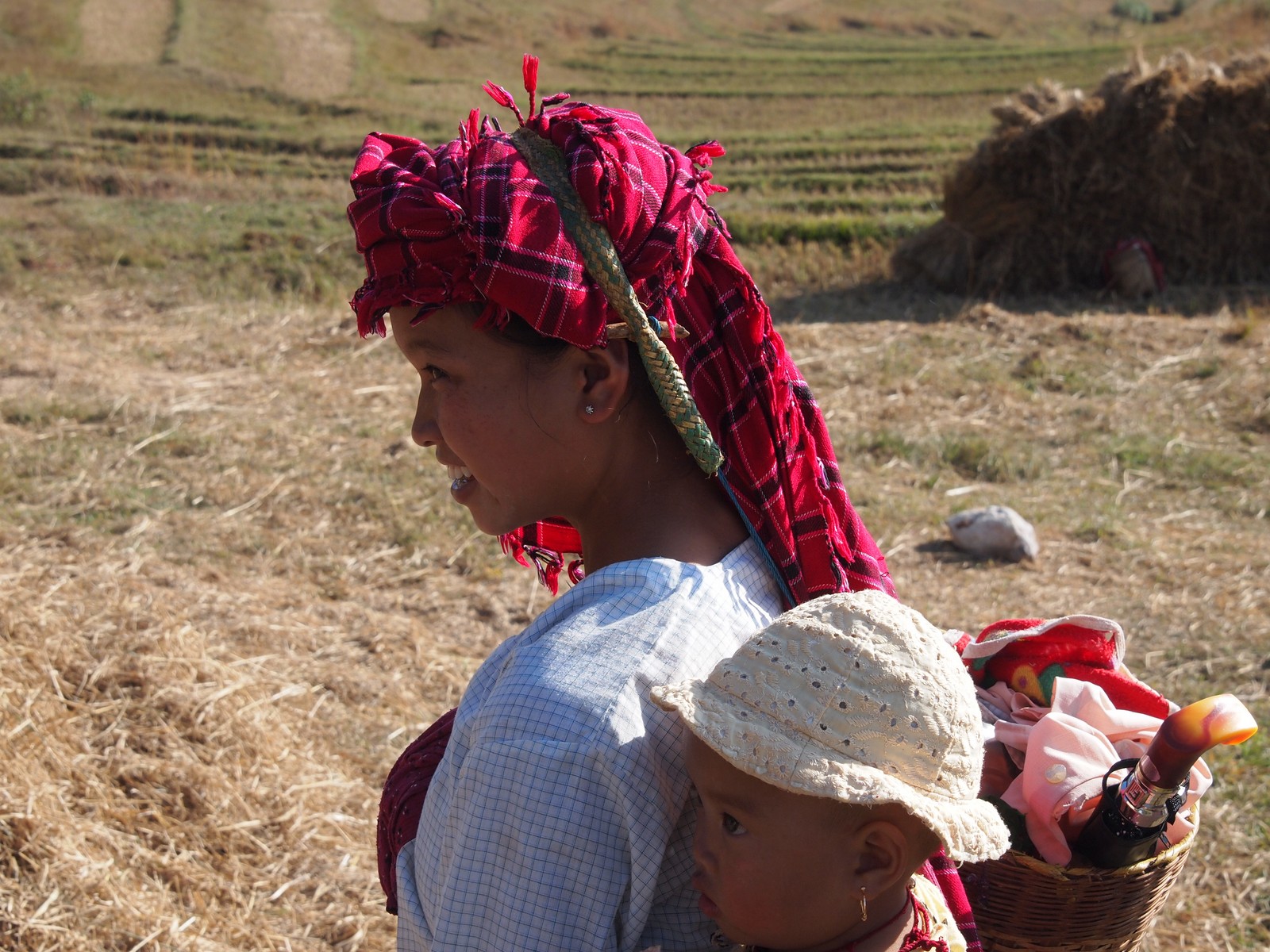 An ethnic Pa Oh Woman carrying her baby in the farm. Photo by Paul Arps, via Flickr, Licensed under CC BY-SA 2.0

While the government aims to increase women’s participation through community forest management plans, 51 the guidance on gender in benefit sharing and forest resource management remains unclear. 52 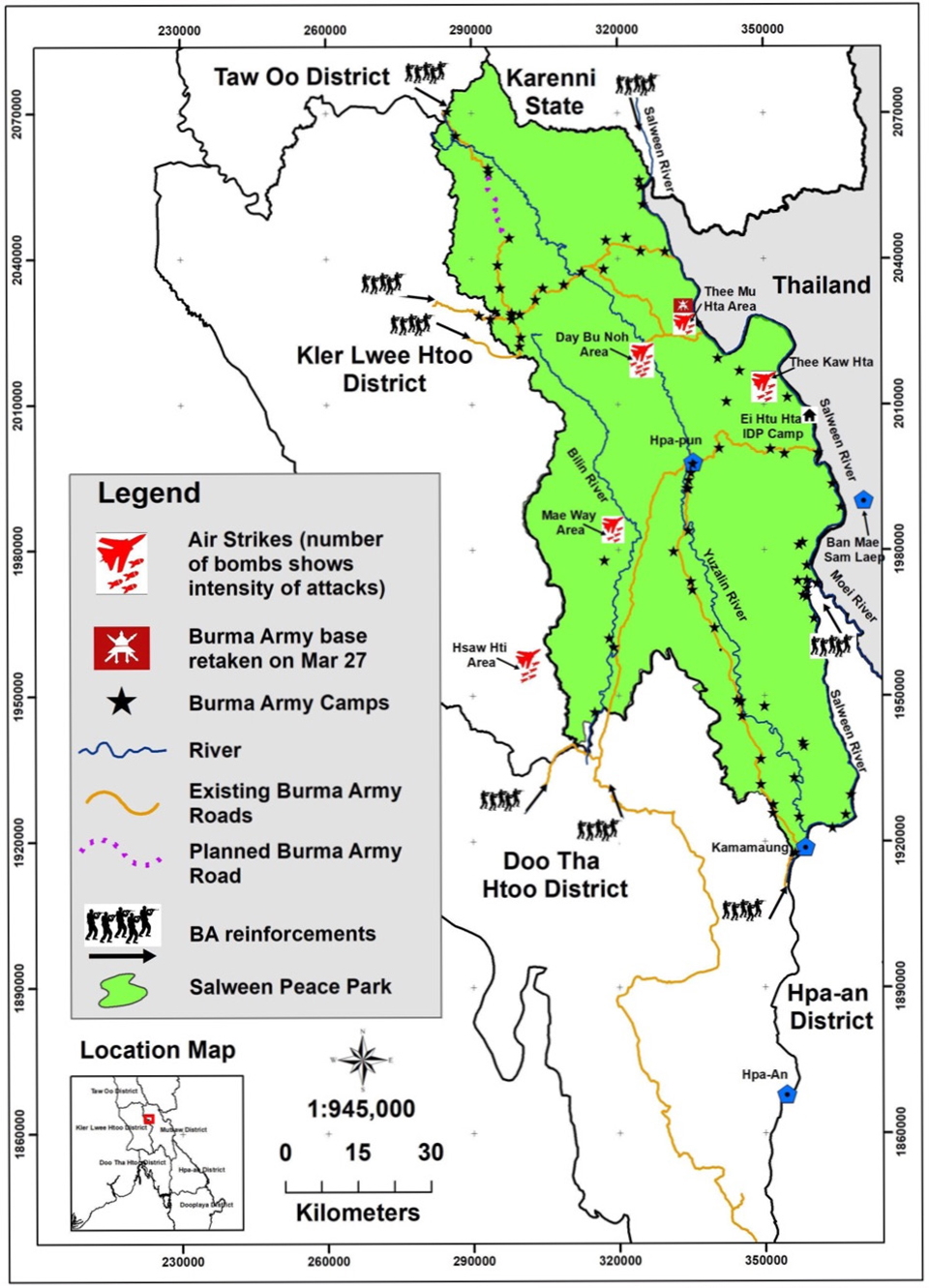