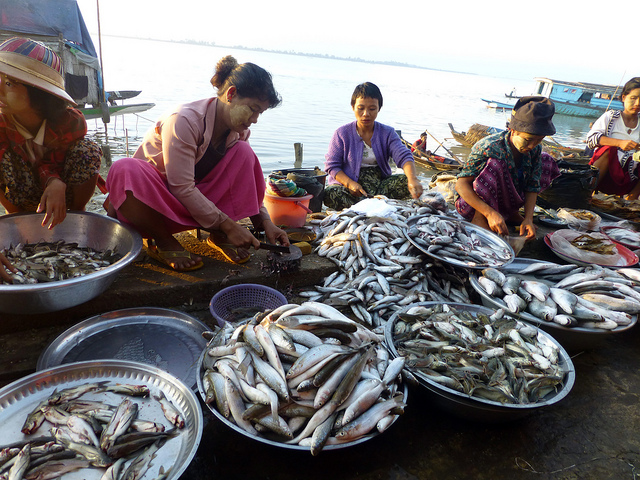 Myanmar’s fishery sector has been the fourth largest contributor to the national gross domestic product (GDP), and the fourth largest source of foreign exchange earnings in the past five years. As the majority of the households in Myanmar live along the four main rivers and in delta regions, the freshwater fish from the inland capture fisheries forms a mainstay of both daily diet and trade. Households generally prefer to consume freshwater fish over marine fish, while the national average annual consumption of fish and fish products is 55 kg per capita. A survey conducted by the UNited Nations’ Food and Agriculture Organization in  2006 found that fish accounts for about 22 percent of protein intake of Myanmar households.1

Myanmar’s total production of fish and shellfish in 2013 was 4.7 million tonnes (MT), with 47 percent of that freshwater varieties and 53 percent from the sea. Based on Department of Fisheries (DOF) statistics, fishery production in Myanmar increased from 4,478.21 thousand MT in 2012 to 5,047.53 thousand MT in 2014.

Inland and marine fisheries make up nearly 80 percent of Myanmar’s fish production at 4.1 million tonnes, and remain a key contributor to the national fish supply. Aquaculture has grown significantly in the past decade, and has now accounts for 22 percent of annual fish production, producing 950,000 tonnes in 2015, according to government statistics reported to FAO. 2 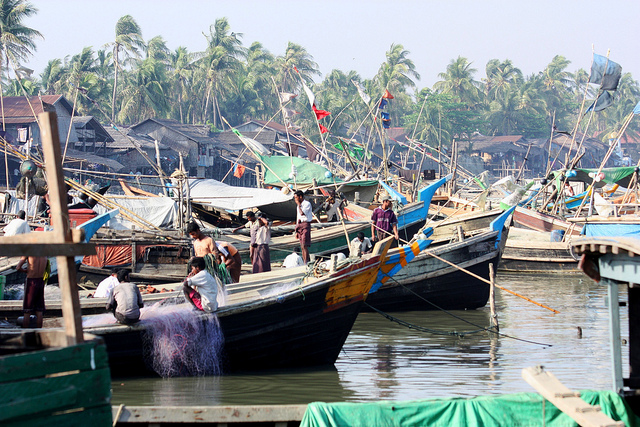 Myanmar was the tenth highest producer of marine capture fisheries in 2012. Between 2003 and 2012, marine catch in Myanmar increased by 121 percent which was the highest among the 18 major producing countries.4

The Marine Capture Fisheries is focused on Myeik Township (Tanintharyi Region) and Yangon, which are the key production and marketing hubs of marine capture fisheries.5

According to the Ministry of Commerce, total border trade between Myeik and Thailand in 2012-13 was valued at US$ 125 million with seafood as one of the major export products. It is estimated that about 70 percent to 75 percent of the total fisheries production in Myeik was sold via the Myeik – Thailand border trade in 2013.6

IIn 2013, Myanmar exported a total of 345,000 MT of fish and fishery products to 32 countries with a total value of US$ 536.27 million. Exported volume was about 7 percent of the total 2013 fishery production, with the majority of export sales occurring via border trade for the regional market.7

China is the biggest buyer of Myanmar fish in terms of export value. Myanmar’s export volume to China increased by 48 percent between the period 2009 and 2013.

In 2009, the European Union banned all Myanmar seafood imports. Imports of seafood were re-approved in 2010, while farmed products remain prohibited. Myanmar exports to the EU increased in 2013 amounting to €223 million, with fisheries products accounting for 8 percent of this total.8