Land designated by the Ministry of Natural Resources and Environmental Conservation (MONREC) (with cabinet approval) as forest in Myanmar is referred to as the “Permanent Forest Estate” (PFE).1 There are three classifications within this: Reserved Forest, Protected Public Forest, and Protected Areas.2 The PFE makes up 30.1% of Myanmar’s territory according to the latest data,3 and the 1995 Forest Policy committed the government to reach a target of a combined 35%.4

However, there are multiple classifications of land that overlap and conflict.5 In addition, non-PFE forested land is under the administration of other laws, particularly the Vacant, Fallow or Virgin (VFV) Law, which is being rapidly leased out to large agricultural concessions.6 Physical forest is therefore disappearing even as areas are added to the PFE. 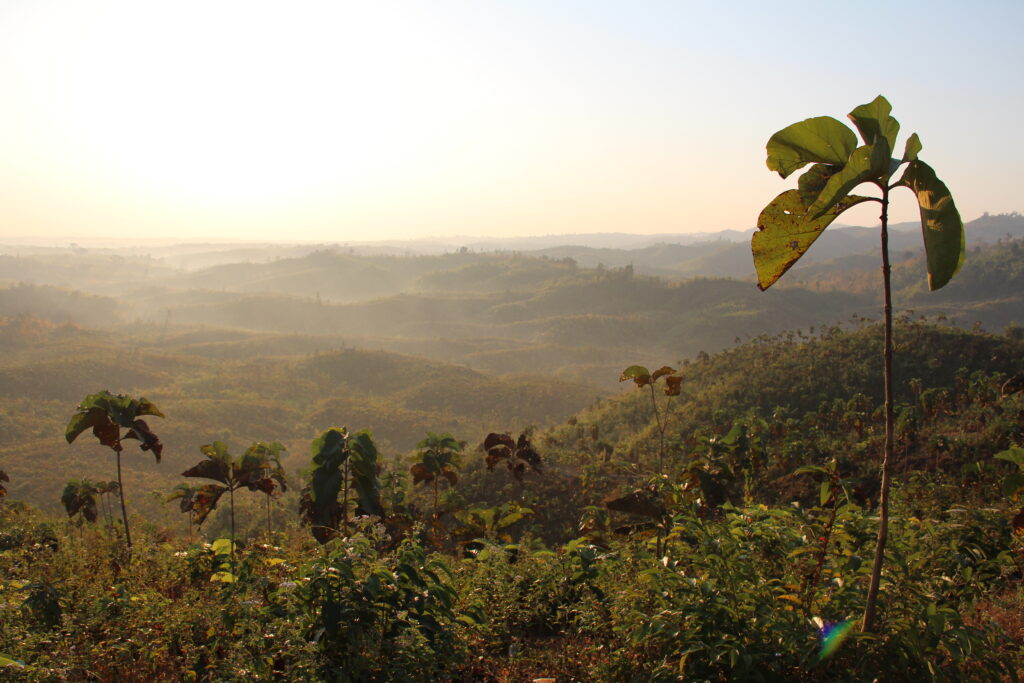 Reserved Forests and Permanent Protected Forests contain both natural and plantation forests. So, practically speaking, forest designations by MONREC are less important than a designation under the Forest Department’s (FD) system of “working circles.”  The FD sets a 10 year management plan for each district of every region or state in Myanmar.7 Each district’s management plan specifies which of 7 working circles land falls into, regardless of whether that land is Reserved or Permanent Protected Forest. Land can also fall under the category of “non working circle”.  The “production” working circle has the largest area, containing native trees with harvest plans determined under the Myanmar Selection System.8 In 2015, Myanmar reported 20.5 million hectares of production forest to the FAO.9 Other circles include watershed forest, protected area, plantation, and community forest.

The law gives MONREC responsibility for both land and forests in the PFE. Other government land on which forests exist, such as VFV land, is managed by other agencies, such as the Ministry of Agriculture, Livestock, and Irrigation and the General Administration Department, although the forests on that land remains under the responsibility of FD.10 However, in reality, key issues such as land concessions and timber quotas have historically been decided by the ruling party leaders and cabinet, regardless of legal forest and land designations.11 Key government actors including departments in MONREC are below.

Myanmar has laws in place governing the timber trade from harvest to export. These laws are rapidly changing, both because the government has realized the need to promote more competition and capture more value from this sector, and a desire to comply with international legal frameworks such as ASEAN’s Criteria and Indicators of Timber Legality and EU-FLEGT. Timber from Community Forests does not fall within the below rules.

The Planning and Statistics Department sets an Annual Allowable Cut (AAC), which is supposed to represent a sustainable quantity of timber harvest from the Production Working Circles in the PFE. However, the military government had for decades set the actual timber quotas at levels higher than the AAC in order to generate revenue and foreign currency.12 There are signs that the current government will end this practice— for instance, official production has stayed close to the AAC in recent years that have data.13, 14 However, the AAC does not account for timber harvested as part of agricultural concessions, road building, or any illegal harvests, including those in forests under the de facto control of ethnic armed groups.15

The Forest Act (as amended in 2018) allows the FD to permit extraction of forest products, including timber, and does not limit recipients of this permit. However, a 1993 cabinet decision designated the MTE as the only entity authorized to log in or sell raw timber from natural forests.16 In the past, the MTE sub-contracted out logging, and some of these sub-contracts allowed logging outside of the bounds of the Myanmar Selection System.17  Recent reports indicate this practice of sub-contracting was phased out in 2016.18 Finally, FD has the right and obligation to charge royalties on timber extracted.19

Under the Forest Act, any transporter of timber also requires a license from the FD.

The MTE sells logs or timber it has milled in the sawmills it operates at open tenders,20 which are public openings of sealed bids. Since the 2014 ban on exporting raw timber, raw logs must be processed domestically before export.21 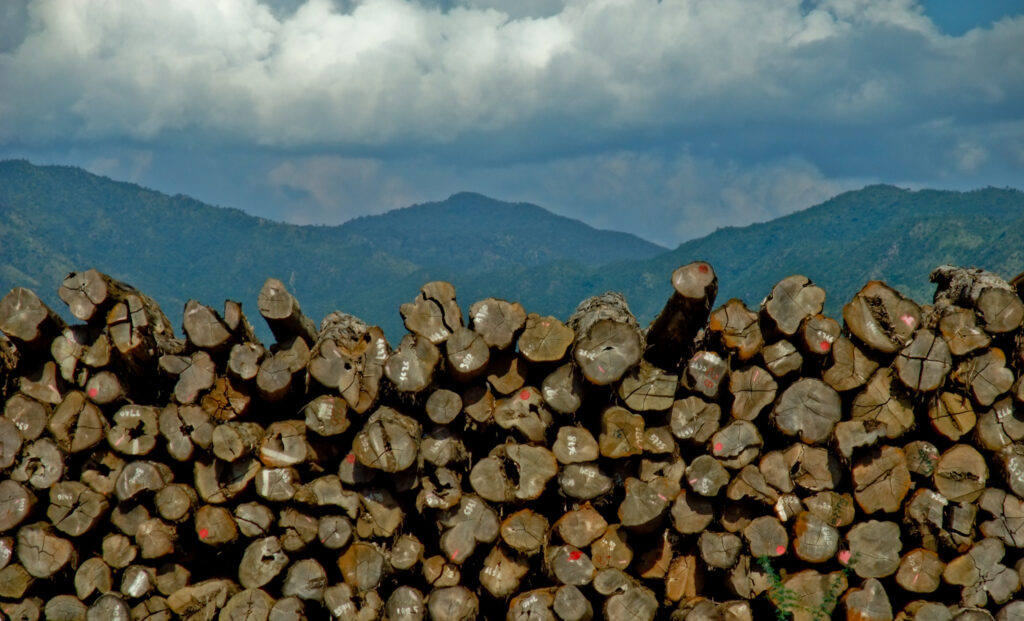 Historically, MTE also owned most of the sawmills and processing facilities in the country while FD regulated the remaining private owners.22 While the government has been trying to encourage private processing operations, sawmills must receive a permit to operate from the FD, while saw-pits (where no heavy machinery is used) must receive a permit from the local forest officer.23

An important development in recent years has been Myanmar’s partnership with the European Union to develop a Voluntary Partnership Agreement that will enable Myanmar to satisfy the EU Timber Regulation. Myanmar is still in the early stages of this process: It entered a “preparation phase” in 2015,24 and the FD conducted workshops around the country to explain the process in 2017.25 However, since then there have not been many reports on furthering the process.

On the other hand, the government is working to develop a “Timber Legality Assurance System” (TLAS) that any VPA will eventually require. The core of a TLAS is supply chain oversight, from pre-harvest to export. It builds on existing laws but also requires further demonstrations of supply chain control, verification, and independent oversight. Thus this system is an important development in Myanmar’s forest laws, though not a requirement of all importing countries. 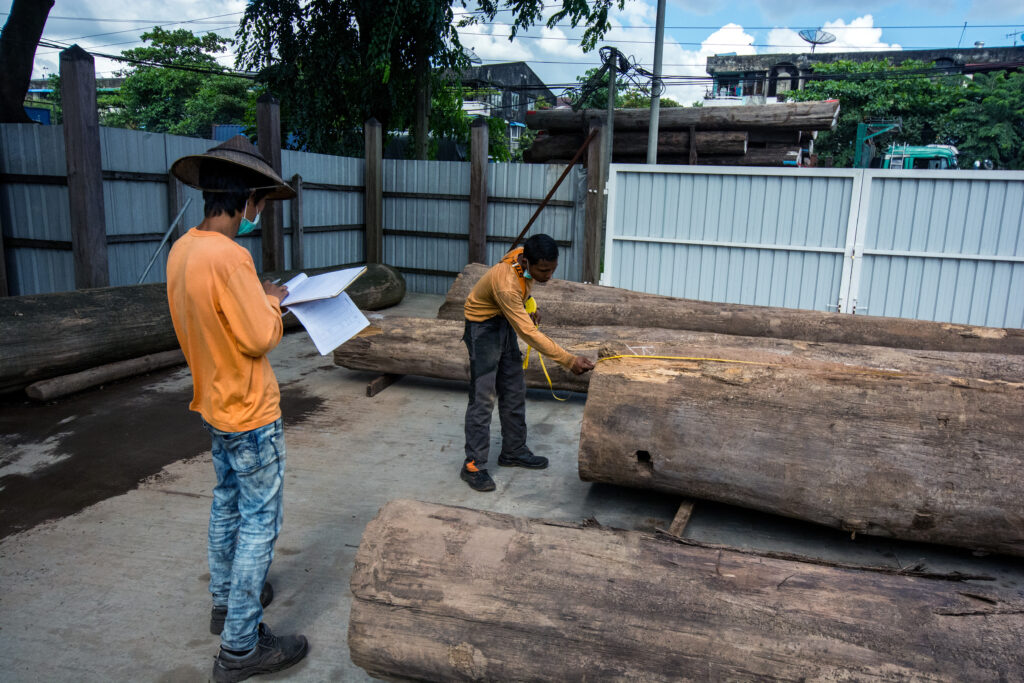 A 2017 analysis of gaps in the present framework was commissioned by the Myanmar Forest Certification Committee, an independent organization established that also has government officials on its governing committee.26 They found that several crucial elements of a TLAS had not yet been developed (including licensing, monitoring & oversight, and stakeholder engagement framework). Other aspects, including definition of standards and verification, would need to be strengthened.27 Moreover, the fact that supply chain controls did not yet encompass timber from commercial plantations, or “conversion timber” from agricultural concessions was found to be reason for concern.28

Historically, rights to forest were community-based and governed by customary traditions, but they are now starting to be recognized by law. The Forest Law (2018) and Forest Rules (2019) both allow for community forestry. The Community Forest Instruction (2016) has been superceded by the Community Forestry Instructions (2019), which spells out the procedures for establishment of Community Forests and the permissible activities connected with them. CFs are permitted in “Reserved Forest, Protected Public Forest, Buffer Zone in Protected area and Land at the disposal of Government”, but one difference between the current Instructions and the 2016 Instructions is that instead of CFs being permitted in “Lands under the management of government agencies; and land owned by privates and non-governmental organizations”, the 2019 Instructions now specify “Forest-covered lands managed by the government organizations” and “Natural forests and mangrove forests conserved by the local communities in accord with their tradition pursuant to section 7, sub-section (d) of the Forest Law”.29,30 Local people who have lived around a forest area for at least five years or within five miles of the periphery of the forest may form a “Community Forest User Group” and as before, apply to the Township or District Forest Officer for recognition and the establishment of a Community Forest. If approved, they must develop a management plan. The CF will be recognized for thirty years, a period which can be renewed as many times as appropriate. Timber harvesting is permitted in accordance with the management plan; commercial level harvesting requires permission from the FD. There are special rules for administrative records for timber from CFs.31

To better understand forest-dependent communities in Myanmar, the Vacant, Fallow and Virgin Lands Management Law (amended 2018), and the National Forest Policy (NFP) are important because they are contradictory to other policy. Although the 2016 National Land Use Policy32 and the 2018 Agriculture Development Strategy encourages respect for customary land use practices, including shifting cultivation, both the VFV Law and the NFP discourage shifting cultivation. The NFP acknowledges that this is an age-old practice but encourages “regularization” and “intensification” of agriculture and an end to shifting cultivation—i.e. a sharp divide between forests and agricultural land.33 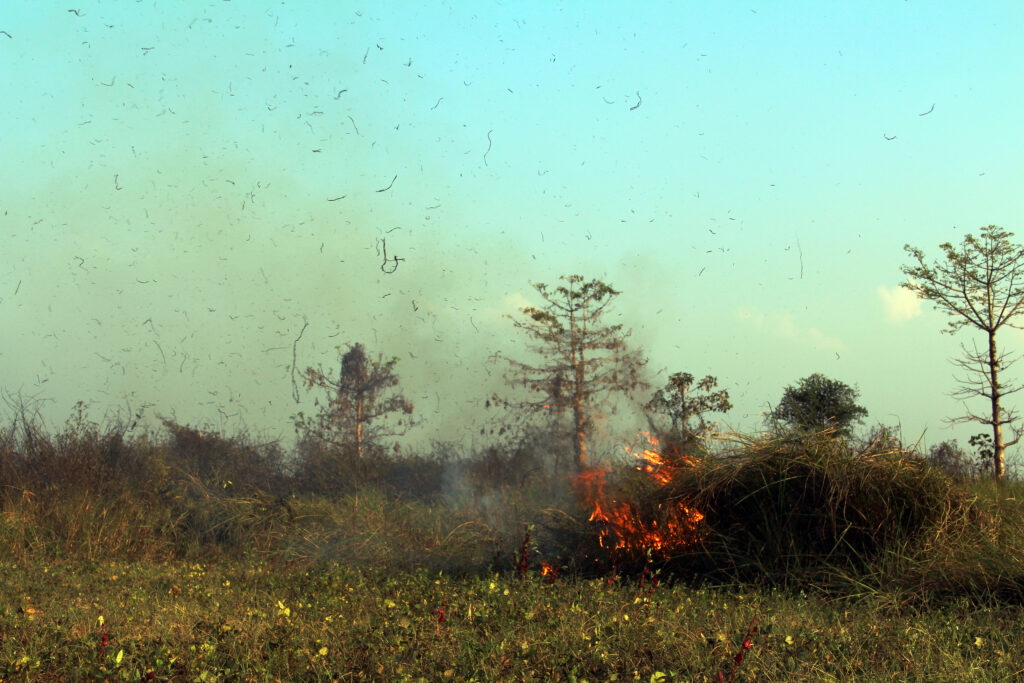 Burning of grass to clear fields is a part of shifting cultivation. Photo by James Anderson, World Resources Institute via Flickr. Licensed under CC BY-NC-SA 2.0.

The VFV supports this by classifying land that is not clearly being used at present for agriculture as VFV. Legislative amendments in 2018 meant that once land was classified as VFV, anyone wanting to claim a pre-existing usage right in that land had only 6 months to do so from the date of enactment of those amendments—i.e. by March 11, 2019.34 Many of those depending on the land were unaware of the classification change and how to secure their rights.35 Given that much of this land is home to ethnic minorities, there have also been criticisms that the law violates the rights of indigenous peoples to free, prior, and informed consent in decisions over their customary lands.36