The UN Migration Agency defines a migrant as “any person who is moving or has moved across an international border or within a State away from his/her habitual place of residence, regardless of (1) the person’s legal status; (2) whether the movement is voluntary or involuntary; (3) what the causes for the movement are; or (4) what the length of the stay is.”1 Myanmar’s special economic zones (SEZs) encourage migration in two ways: first, because they are designed to create employment, people will relocate to work there.2 Second, because SEZs are a mega-project requiring significant amounts of land, they require the migration of those living in the zone prior to its creation. 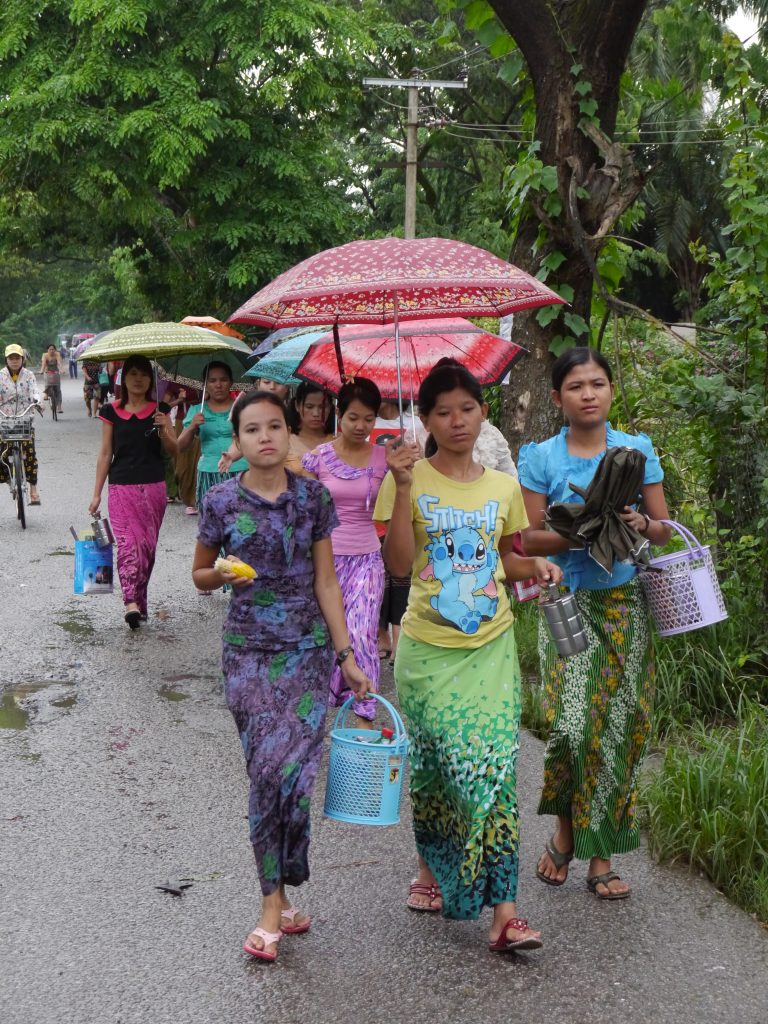 Rural to urban migration, especially for work, is very common. Photo by Solidarity Center via Flickr. Licensed under CC BY 2.0.

Myanmar currently has two SEZs: Thilawa and Kyauk Phyu. Only Thilawa SEZ has not run into any roadblocks. Thilawa SEZ also has the most detailed information regarding migration largely due to an investigation performed by the Japan International Cooperation Agency (JICA).3 The lack of availability of public information on SEZs is a large challenge; there is little current information available on any of the three zones.

This page focuses on migration away from locations of SEZs in Myanmar. Specifically, it details the available information regarding policies for relocating residents of a zone, and it details complaints made by some project affected persons (PAPs).

The Thilawa SEZ is located outside of Yangon and is funded by joint investment by Japan and Myanmar.4 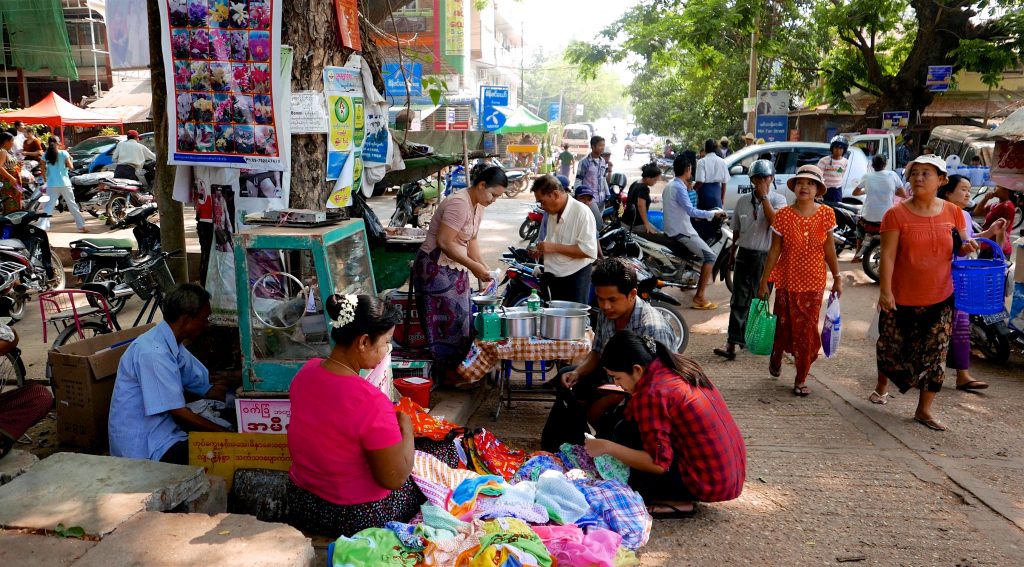 Thanlyin, is a major port city in Myanmar. Home to many communities, it is where the Thilawa SEZ and port are located. Photo by Werner Bayer via Flickr. Licensed under CC0 1.0.

The Thilawa SEZ website lists a page discussing policies on “project affected persons (PAPs).”5 The responsibility for relocation falls on the Yangon Regional Government.6 It also notes that there was a “misunderstanding” with some PAPs resulting in an external investigation, initiated by three PAPs, to determine whether the investor JICA had complied with its own standards.7 They did not look into whether the Yangon Regional Government or the Thilawa SEZ Management Committee had violated the PAP’s rights.8

Three PAPs filed a request for an investigation in June, 2014 alleging violations of five JICA standards.9 They alleged that as a result, their rights were violated.

One central allegation was that the PAPs were “induced to sign resettlement agreements in an atmosphere of heavy coercion.”11 They referred to an incident in 1997 during which homes were destroyed by the military regime if residents did not move out immediately after they received the eviction notice.12 Other allegations stated that officials had implied that if villagers did not comply they would need to go to court, which most villagers found intimidating.13 The investigation report did not find active coercion or threats although it noted that several households may have felt coerced.14

JICA’s began investigations in 2014 to determine whether JICA, as a funder, had violated its standards, listed in its guidelines.15 These guidelines apply to the project but they are not binding upon the government or other actors, and Myanmar’s obligations under international law prevails .16

Overall, the investigation found that JICA did not violate its standards in relocating the PAPs. Nevertheless, it suggested ways that things could be done differently moving forward, and indicated some problems. For example, the report noted that monitoring of water conditions should be continued,17 and it suggested that JICA respond to requests in writing as well as by phone.18

The report also found that 81 households lost farmland, and that they would not be able to continue farming after relocation.19 The PAP’s only compensation provided for loss of employment was equal to wages for seven working days.20 At the time of the investigation, nineteen farming households were participating in vocational training, and only four had secured new jobs.21 Fifteen households remained without sustainable income sources.22 The report noted that “[e]ven if impoverishment accelerated, all of the impoverishment cannot be regarded as negative impact suffered by the Requesters from the resettlement itself.”23

Summary of JICA Findings Regarding Complaints

In addition, some answers contradicted findings of the JICA investigations.29 The JICA investigation concluded that 81 families (or 64% of the families in the Resettlement Work Plan) lost access to farmland.30 However, the Thilawa SEZ Management Committee claimed that over 60% of relocated families did not farm, and that those who did lacked ownership of the land.31 The Thilawa SEZ MC further claimed that they compensated farmers “with six-year crop value as livelihood assistance.”32 While six-year compensation is true for rice farmers, vegetable and tree farmers were only compensated with four-year yields.33

The Kyauk Phyu SEZ (KPSEZ) is located in the Rakhine State along the Bay of Bengal. The details of the development of KPSEZ remain largely shrouded in mystery, especially when it comes to the removal of existing residents. In February 2017, the International Commission of Jurists (ICJ) produced a report on what is known about the project, and noted deficiencies in procedures for removal.34 Notably, however, ownership and project scope has been renegotiated, and the project was scaled down significantly in November 2018.35 The website for KPSEZ remains seemingly untouched, as the latest update is from 2015.36 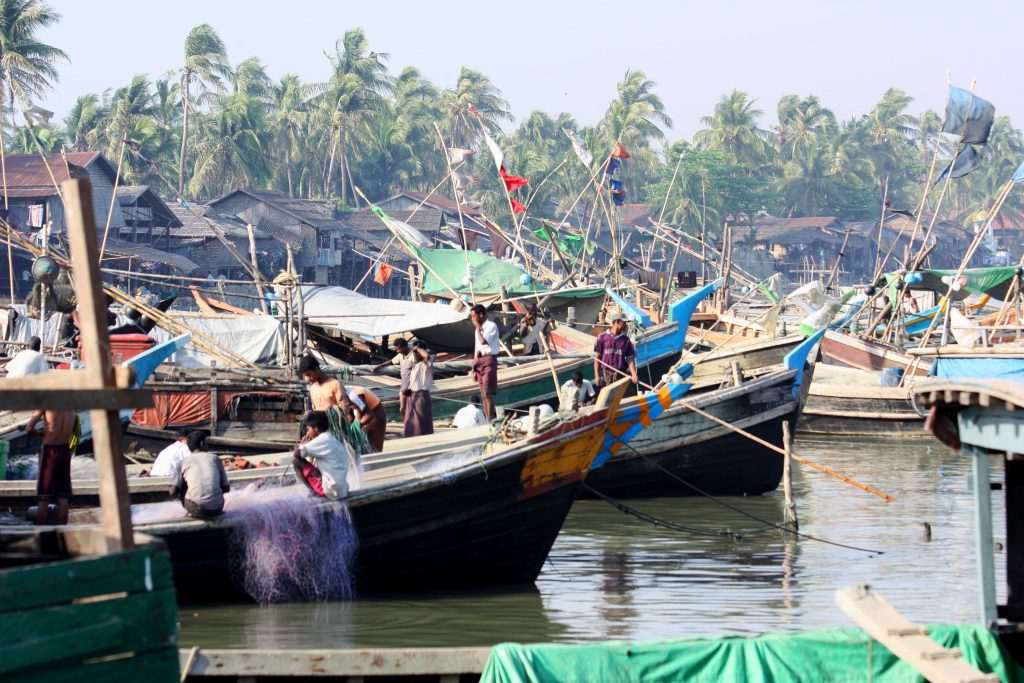 Fishing boats on the Bay of Bengal in Sittwe, Rakhine State, Myanmar. The Kyauk Phyu SEZ is located Southeast of Sittwe. Photo by Daniel Julie via Wikimedia. Licensed under CC BY 2.0.

Prior to renegotiations, 20,000 people faced the possibility of involuntary resettlement.37 This number likely remains relatively accurate because the investment reduction that occurred in November 2018 was related to the seaport,38 whereas it is the land, earmarked for an industrial park, that will get resettled.39  It is not clear exactly when or if relocation will occur.

The next steps for the SEZ remain unclear. The Advisory Committee on Rakhine State recommended in 2017 to promote growth and end conflicts.40 They recommended that the government carry out a strategic environmental assessment (SEA) to “explore how the Special Economic Zone (SEZ) may affect local communities[.]”41 Myanmar’s State Counselor, Aung San Suu Kyi, publicly endorsed the report and promised to implement its recommendations.42 The government also created an implementation committee to assist in implementing the recommendations, making the SEA the logical next step.43

Procedures, lacking at the time of the 2017 ICJ report, continue to be lacking. Procedures to protect people displaced by the KPSEZ remain notably absent from the SEZ’s website,44  though they may be created in future. Regardless of the next steps, both the Myanmar Times and ICJ note the importance of transparency moving forward.

While the Dawei SEZ has been cancelled, it is still helpful to compare its plans to the KPSEZ. The Dawei SEZ originally was to be built over two phases: the “Initial Phase (2015-2020)” and the “Full Phase (after 2020).”45 The initial phase involved the development of 35 square kilometers while the full phase called for development of nearly 200 square kilometers.46 Thus, the majority of migration related to this project was expected to occur after 2020, as the site was to be developed then.47 Unexpectedly, Dawei SEZ project was suspended in early 2021. 48

Relocation and compensation was intended to occur in line with international practices.49 and led by “experts appointed with experience in similar scale projects[,]” based on international guidelines, with input from affected communities, and in a transparent manner.50 As a part of transparency, the finalized plan was meant to be made available to the public.51 However, the website no longer has this information.52