The rapid growth of a young adult population in Myanmar will affect the socio economic development plan of the country. Investment in skills development, employment and livelihood opportunities is necessary to cater for the growing and the emerging youth bulge to create favorable conditions for a demographic dividend in Myanmar. 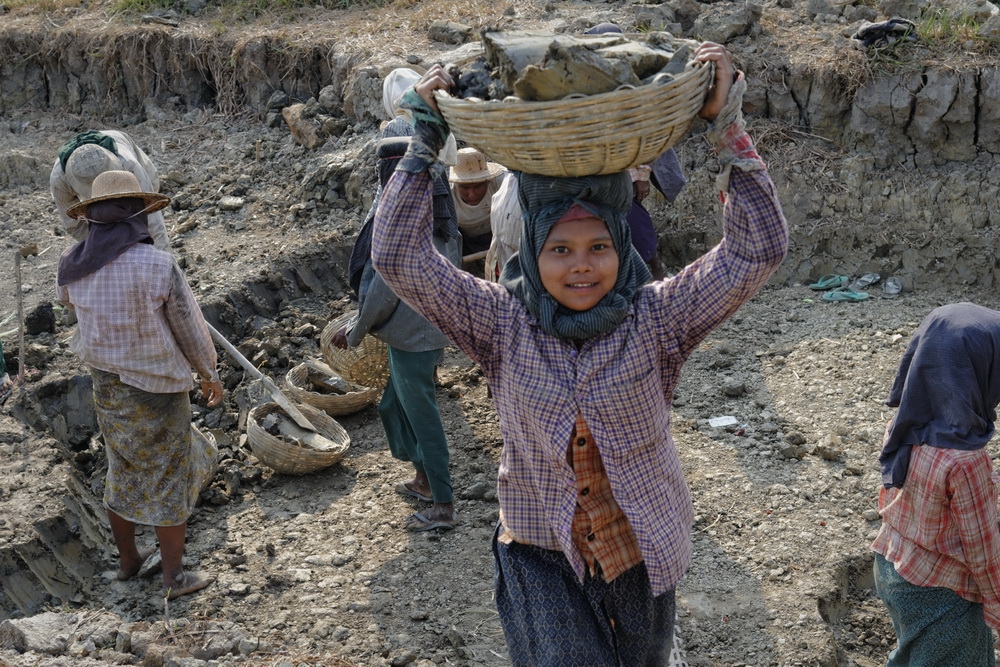 The country’s labor force participation rate—the percentage of employed people older than 15 years— was 63.4 percent in 2014, with almost double the percentage of men to women, with 81.7 versus 47.1 percent respectively. According to the census figures, 3.9 percent of the labor force were actively seeking but could not find work. The union unemployment rate for men and women were similar, at 4 percent and 4.2 percent respectively.1

The proportion of employed people by occupation was highest in the “Skilled Agriculture, Forestry and Fishery Workers” category  at 42.9 percent. The second-largest employment categories are “Elementary occupation”  with 16 percent, followed by “Service and sales worker” at 13 percent. “Craft and related trade workers” was also high, employing 11.7 percent of employed people.2

The chart below shows the labor force participation rate and unemployment rate from 2014 Census.

Myanmar’s labor protection is formed by a patchwork of many different labor laws, many of which were enacted between the 1920s and 1950s. As with many other laws introduced by the British colonial administration, most of the labor laws from colonial period have survived and been effective until recently.In recent years, the government has made an effort to update the national labor laws and provide stronger protections for the local workforce.3

For example, the Workers’ Compensation Act of 1923 was amended in 2005, and the Trade Union Act of 1926 was reformed in 2012. The Trade Union Act was one of the first laws to be repealed after the political reform in 2011 together with the Trade Disputes Act of 1929, which were respectively replaced by the Labor Organization Law in 2011, and the Settlement of Labor Dispute Law in 2012. The payment of Wages Act of 1936 is still in effect.4

Myanmar does not  have a work permit system in place for the employment of foreign workers. Foreign nationals who need to reside and work in Myanmar for long periods of time must obtain both a Stay Permit and a special re-entry visa, which are readily available for employees of companies that hold an investment permit from the Myanmar Investment Commission.5

The estimated number of children in Myanmar was 12.146 million, with about 10.5 percent of  this number working,  totalling 1.279 million working children. Of these, 52.9 percent (676,208) were boys and 47.1 percent (602,701) were girls.The definition of working children in the 2014 Myanmar census is as follows: those whom during the past seven days have been engaged for one hour or more, on a full-time or part-time basis, paid or unpaid, in the production of goods and services that have a market value.

In Myanmar, over 77 percent of children between 5 and 17 years are attending school, This privilege does not extend to the majority of children in the labor force, with only 0.3 percent of working children being able to attend school, according to the statistics from the International Labor Organization (ILO).

Myanmar became a member of the ILO in 1948, and has received their financial and technical assistance  to improve occupational safety & health (OSH) since then. However, the ILO’s national profile on Myanmar’s OSH framework found that existing laws, acts, rules & regulations relating on occupational safety & health (OSH) are not up-to-date, do not cover all workplace hazards, and many had not been amended yet.6

On 22 November 2015, a major landslide in Hpakant, Kachin State, northern Myanmar killed at least 116 people near several jade mines, more than 100 others were missing. That is the fourth time a massive landslide occurred at a jade mine in Kachin State in recent times. Many of those were people who made their living searching on or near the waste dumps, in the hope of finding piece of jade to sell.7

The chart below shows the monthly wages by gender, urgan/rural and sector according to a survey by International Labour Organization.

A new minimum wage law, passed in March 2013, replaced the 1949 Minimum Wage Act. The new minimum wage is not announced yet by November 2013, though the Ministry of Labor in 2012 set up as temporal minimum wage 56,000 kyat (US$65) per month after serious disputes in garment factories.

According to the ILO statistics, for all employees, the average wage per day was 4,760 Kyats and for the daily wagers 4,280 Kyats. It is much higher in urban areas than rural areas. Similarly males get higher wages than females. The service sector has the highest wage rates.8

The 2014 Census shows that 53 percent of all people who moved from their previous place of usual residence within Myanmar were female. The main reason for movement for both sexes was “following family” and “employment/seeking employment.” Females were more likely to follow family (49%) than males (32%); and males migrated more for reasons of employment (47%) than females (23%).9

According to the census data, there are approximately 2 million former household members living outside of Myanmar. Of these, about 1.2 million are male, representing 61 percent of the total population are reported to be living out of the country. About 70 percent of those living outside Myanmar were reported to be living in Thailand, while 15 percent were in Malaysia. The census shows that out of the approximately 2 million people reported  to be living abroad, about 1.7 million are between the ages of 15 and 39 (83 percent) and up to 1.1 million in this age bracket are male.11