Myanmar has recently seen economic growth, especially in agriculture, forestry, fisheries, service and sales, and craft and related trade. The labour force is primarily male, with 77.1% of working age men participating in the labour force in 2017, compared to 54.3% of women.1 However, participation in different sectors is gendered. Two such sectors are manufacturing (especially the garments industry, where 84% of workers are women), and retail.2 Furthermore, women are significantly more likely than men to work in informal and vulnerable forms of employment, for example as unpaid workers in a family business or farm.3 Sectors such as agriculture, in which almost 50% of women are employed4, are particularly insecure; almost no workers are formally employed and instead are self-employed or an unpaid family worker.5 This puts rural women at even greater disadvantage. 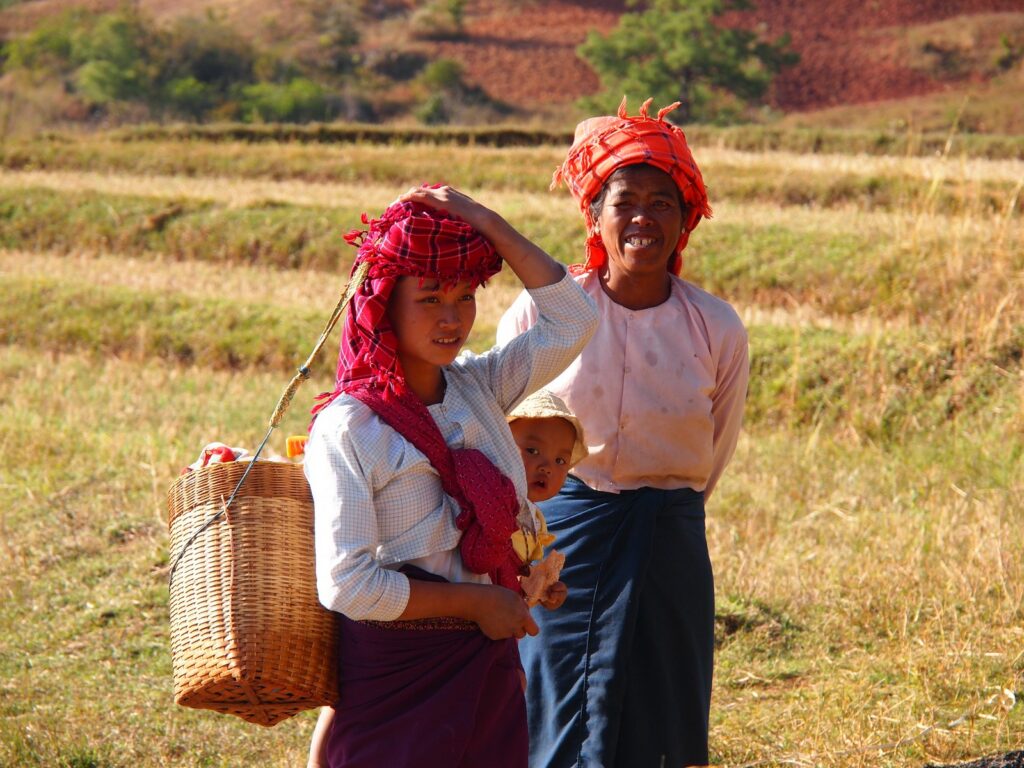 Rural Pa-Oh women are some of the many women in Myanmar who work in agriculture for a living. Photo by Paul Arps via Wikimedia Commons. Licensed under CC BY 2.0.

The impact of COVID-19 on Myanmar’s Economy

Myanmar’s economy has suffered as a result of COVID-19-related restrictions on movement in other countries because it’s economy relies primarily on exports. For example, 175 factories have stopped operations since December 2019.6  Likewise, the fisheries sector has suffered due to the drop in demand as all international orders have been cancelled.7 These impacts have impacted women more: The sectors that have been hit the hardest by the COVID-19 pandemic are also the ones that women in 2017 were more likely to be working in.8

As of 29 April 2020, the Ministry of Labour, Immigration and Population reported that 60,000 people had been let go from factories.9 In-country movement restrictions and a sudden shift in the country’s economic need has disproportionately impacted people who are less resilient, such as migrant workers. From 22 March to 15 June, 2020, a total of 135,469 migrant workers reentered Myanmar from Thailand, China and Lao PDR, across the borders. One third of these were women.10 Similarly, small businesses including education services, restaurants, and agriculture firms are fighting to survive. The Myanmar Business Environment Index surveyed 750 businesses and found that 76% have closed or were operating on reduced hours.11

However, the full impact of the pandemic on the employment of women and other marginalized populations is difficult to estimate. This is due to the fact that they make up a high proportion of informal workers, which statistical processes have not fully captured. Further, not all data is well disaggregated, which means that some people, such as women, Indigenous Peoples and ethnic minorities, and migrants, may be “invisible” in the data or not be represented at all. 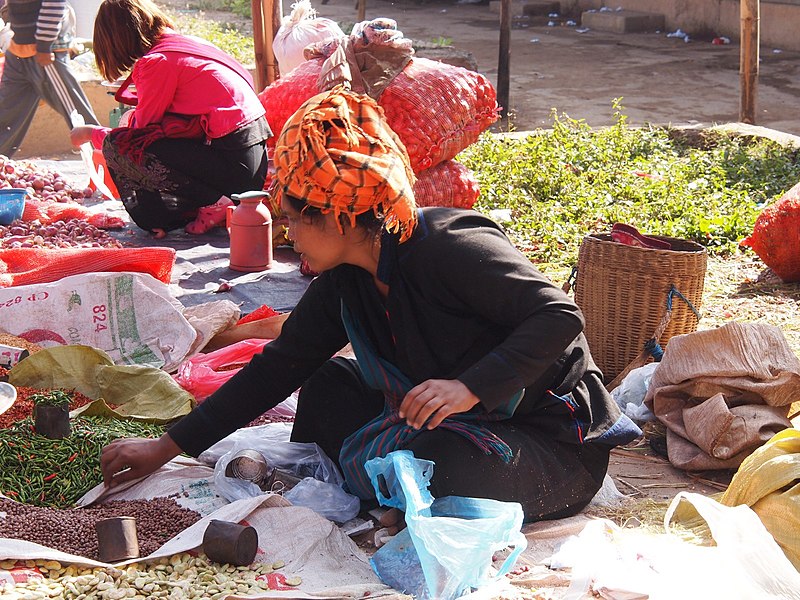 Women, such as this woman selling staples at a local market, are more likely to be working informally. Photo by Paul Arps via Wikimedia Commons. Licensed under CC BY 2.0.

What support has been provided?

The government has issued a COVID-19 Economic Relief Plan (CERP), with a budget of $2-3 billion that is billed as “comprehensive”. Based on the number of targets and indicators, the goals are primarily focused on reviving the private sector. Gender is not mainstreamed into the policy. Further, observers have noted that the goals in this policy lack specific measures.12

The CERP is supported by an emergency stimulus package of $70 million (March 19th) and a Working Committee for Remedial Works on Economic Impacts of COVID-19 (March 13th). One of the challenges to responding to COVID-19 that was identified is that this is an election year.

The government has also developed an education specific recovery plan.13 In addition, the government has established a COVID-19 Fund of 100 billion Myanmar Kyats (approximately USD 75 million) to provide loans with one percent interest rate and one year loan period to support local businesses including agriculture, livestocks and fishery firms; production industries for export and import substitutes; firms in the supply chain from domestic to export; food industries; overseas employment services; and vocational training schools.14 The government has been limited in providing direct support. Any such support was short-lived and primarily provided at the beginning of the pandemic. The below figures show that only five of the 86 regulations and announcements from the government regarding COVID-19 measures have to do with providing services to those affected by a loss of income.

Some existing programs led by international NGOs, such as the UN Women’s Rakhine program, have been adapted to COVID-19.15 The UN has also developed an immediate socio-economic response to COVID-19 in Myanmar that aligns with the government’s CERP.16

What more is needed?

With the data we already have, it is reasonable to assume that women’s employment is being impacted by COVID-19. However, without more detailed data, it is difficult to know how to ensure policies and social supports meet women’s needs.

There has been some recognition of this data gap in Myanmar. The World Bank has collected data for a monitoring platform, supported by Myanmar’s Central Statistical Organization. This data is collected at a household level, which means that women are likely insufficiently represented in the data due to limited disaggregation.17 Similarly, the WFP and the FAO is working with the Ministry of Agriculture, Livestock and Irrigation across some townships and in some areas of Yangon to understand more on food security and livelihoods. It is not clear if this data provides particular insight into gender issues in this regard. Additionally, the MIMU is hosting a temporary initiative to collate available knowledge, data and information related to COVID-19 in Myanmar on a single platform. However, this is only supported until August 2020. While useful, this does not specifically contribute to either the lack of baseline data, or the lack of up-to-date and reliable data. Some work is being done by UNDP to support Myanmar in its statistical work related to the SDGs; however, the gender-related indicators in the SDGs are not comprehensive.