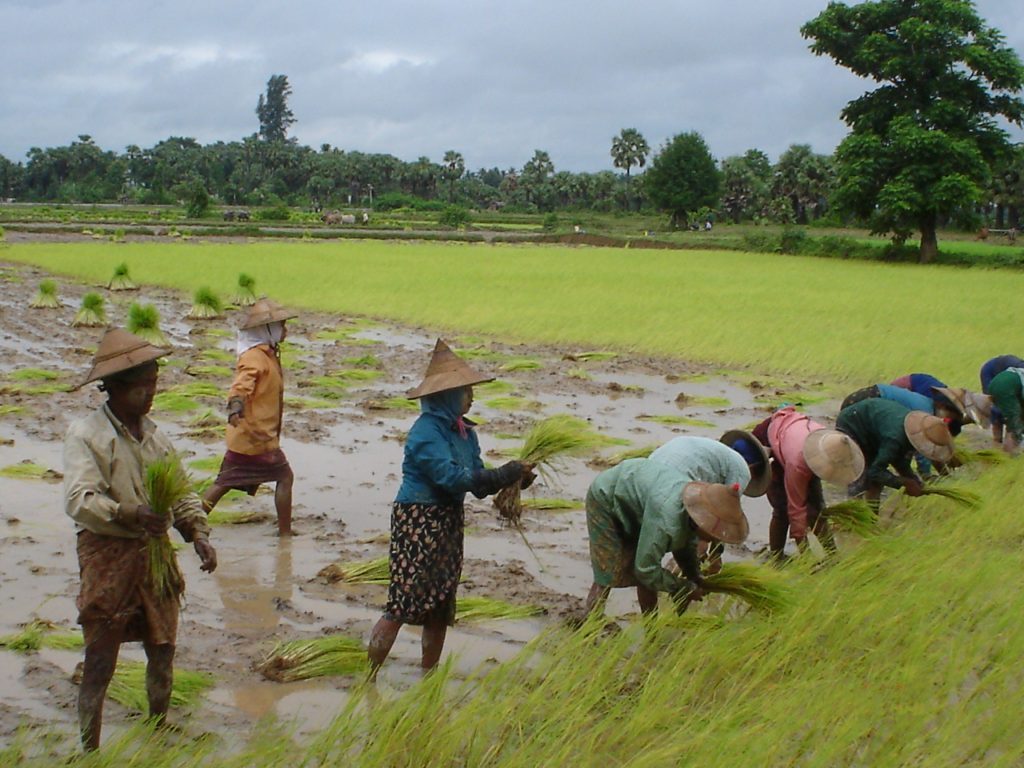 Farmlands in Burma. Photo by Rijstvelden, taken on 7 October 2006. Licensed under CC BY-SA 3.0

Agriculture is the mainstay of the Myanmar’s economy, contributing 37.8 percent of gross domestic product (GDP) in 2010, down from 47 percent in 2005/2006. Agriculture, which includes crops, livestock, fisheries and forestry, accounts for just over 52 percent of the working population aged 15 years and over.1

It also accounts for between 25 and 30 percent of exports in 2013. Agricultural exports dropped to 26 percent in 2008, reflecting the devastation of the rice and other crops by Cyclone Nargis. In 2009, agricultural exports accounted for 28 percent of total exports.2
It is estimated that the annual income per agricultural worker in Myanmar was US$ 194 in 2012 compared to US$ 6,680 in Malaysia and US$ 706 in Thailand.3

Agricultural policy
The government places a high priority on the agriculture sector, especially the food crop sub-sector, relying on it to be an engine of inclusive economic growth. In 2003, the government ended production quotas and opened up the export market to the private sector. Innovative measures have been taken to promote increased agricultural production, designed to improve rural livelihoods.

The government has introduced significant political and economic reforms since 2011. Among these, the Farmland Law and Foreign Investment Law address issues fundamental to development.5Under the Farmland Law, once the owners have registered their land, they have the right to sell, pawn, lease, exchange, donate, and/or enter into a joint venture.

Although the law pleased the farmers whose lands were not confiscated, it did not benefit those whose lands were seized during the military regime, triggering farmers’ protests in many parts of the country.

Rice is the most important agricultural commodity of Myanmar as a staple food, and production has increased from 18 million tons in 1995 to over 22 million tons in 2010. Myanmar was once Asia’s largest exporter of rice and Other main crops include beans, sesame, groundnuts, pulses, sugarcane and lumber.6 Low agricultural productivity is the result of multiple factors, many of which are associated with the under supply of quality agricultural public goods. A decrease in labor availability can be driven by rising wages outside of agriculture.

According to the statistics from the Customs Department, up to January 28 in 2016 , maritime exports of Myanmar rice reached 66,393 tons,  just over 7 percent of total export, while border trade accounts for 840,804 tons, which forms the rest of total export at  almost 93 percent. Despite the government’s target for lifting production to two million tons of milled rice for export by 2015 and four million tons by 2020, actual rice export has reached only about 1.3 million tons in 2012/13.7
Myanmar exported 1.54 million metric tons of beans and pulses in 2015, up 25 percent from the same period last year 7. According to the Ministry of Commerce, approximately 80 percent of Myanmar’s total bean and pulse exports in 2015 were shipped to India.

Myanmar’s agriculture is heavily dependent on the monsoon rains. While some areas suffer from too much rain, other regions receive too little. Floods occur regularly during the mid-monsoon season (June to August) in areas traversed by rivers and large streams. Climate change phenomena have been cited as the reason for late and lower rainfall, longer dry spells and increased temperatures. Myanmar was affected by the Indian Ocean tsunami in 2004, Cyclone Nargis in 2008 and Cyclone Giri in 2010, events which all had a major impact on national agricultural output.8

Fish is an essential part of the Myanmar diet, second only to rice. Fishing occurs in both salt and freshwater, and an estimated 300 species live in Myanmar’s freshwater ecosystem. Fisheries may be classified into various categories: marine, coastal, river, inland and aquaculture.9
The total production of fish and shellfish in 2013 was 4.7 million tons (MT), 47 percent of freshwater and 53 percent of the sea. Capture fisheries contributed 3.06 million tons and aquaculture 0.78 million tons10. The fishery and aquaculture sector provided direct employment to 3.16 million people, with 22 percent of this figure in full-time work and the remaining 88 percent in part-time and occasional employment. Fisheries exports were valued at USD 497 million in 2010.11

China is the largest importer of Myanmar’s fisheries products, particularly marine fisheries, based on Chinese consumers’ preference for saltwater fish species and shrimp, rather than the freshwater fish species traditionally farmed and caught in Myanmar. Myanmar exported between 5 and 10 percent of its production to the EU in 2010. 12