Elections in Myanmar are held for the Pyidtaungsu Hluttaw (the Assembly of the Union, Myanmar’s national legislature) and for regional and state Hluttaw (assemblies)1 The national legislature is made up of two bodies, the Amyotha Hluttaw (the 224-seat House of Nationalities) and the Pyithu Hluttaw (the 440-seat House of Representatives). Three quarters of the national seats in each House are selected through elections, most recently held in 2015. One quarter of the seats in each House are made up of army representatives selected by the Commander-in-Chief. 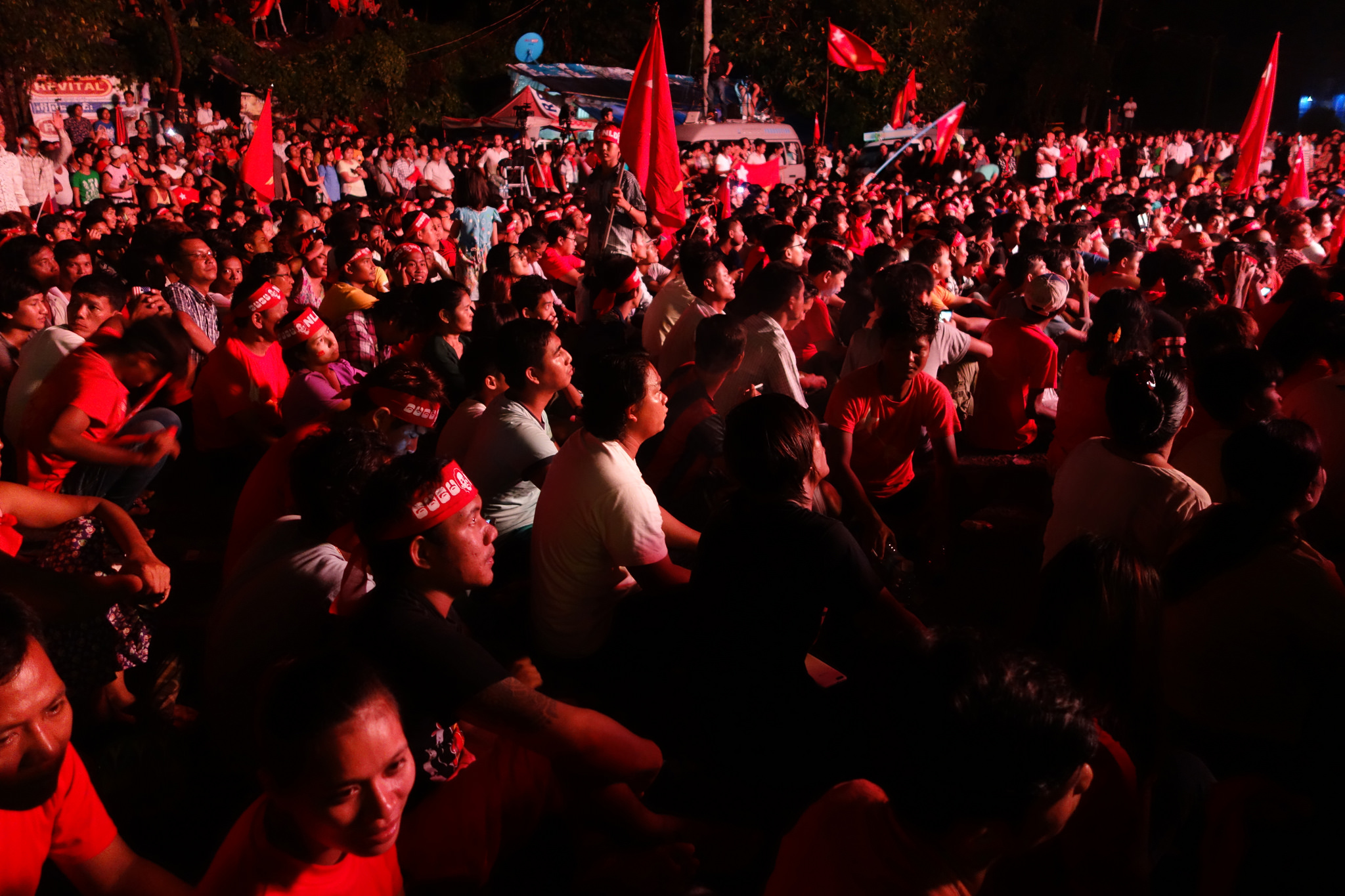 Myanmar’s history of elections began before its independence on 4 January 1948. After winning the 1947 general elections, the Anti-Fascist People’s Freedom League (AFPFL) took 173 out of the 210 seats, running unopposed in over fifty constituencies.2 Aung San, the student leader-turned-general-turned-politician, was set to become Prime Minister. However, he and six other cabinet members were assassinated on 19 July 1947 – a date that became known as Martyr’s Day in Myanmar. Because of this, U Nu became both the Prime Minister of Burma (as the country was called then) and leader of the AFPFL.

Three more elections were held before a long-lasting military takeover that began in 1962.3

Civil war followed independence due to increasing factionalism of the independence coalition, and at one point the government just controlled a few major cities. Elections were held again in 1951–52, where the AFPFL won 60 percent of the vote and 199 out of 250 seats. Voter turnout was low at 20 percent.4

The 1956 elections saw a drop in the popularity of the AFPFL, winning 148 out of 202 seats. The end of this round of elections saw U Nu temporarily retired to reform the parties. Ba Swe took over as the Prime Minister-elect.5

After a major split in the AFPFL into the Clean Faction led by U Nu and the Stable Faction led by U Kyaw Nyein and U Ba Swe, the military took over in October 1958 to bring stability and improve infrastructure in the country in the ‘Ne Win caretaker government’.6 The elections in 1960 were seen as less than a contest between the AFPFL factions and more as a referendum on the policies of the interim military government. U Nu won the elections, gaining 158 seats out of 250 and 57.2 percent of the votes. However, this was not to last as U Ne Win launched a coup d’état on 2 March 1962. This marked the beginning of authoritarian rule in Myanmar which spanned 26 years.7

After the 8888 uprising against the military regime, which involved a series of nationwide demonstrations, marches, protests, and civil unrest where more than a million people took part, U Ne Win stepped down and pledged for elections in the future. This promised election, which took place in 1990 was won by Aung San Suu Kyi, daughter of Aung San and leader of the NLD. She took 392 of the 492 seats available. However, the military junta refused to accept the results and ruled as the State Peace and Development Council until 2010.

The 2010 elections saw U Thein Sein, of the USDP (Union Solidarity and Development Party) win, getting nearly 80 percent of the seats. The UN and western countries dismissed this election as fraudulent and the NLD decided to boycott the election due to election laws banning political prisoners from competing in the elections.8

The 2012 by-elections saw the NLD rise to power, winning 43 of the 44 seats they contested. Though marred by a few controversies in monitoring the elections, voter irregularities and acts of intimidation, the elections were carried out. The aftermath led to the steady removal of sanctions by western nations.9

In 2015, the general elections were held with the NLD winning a supermajority of the seats in the combined national parliament. Voting took place in all constituencies except those where the seats were reserved for the military. These polls were the first openly-contested elections since 1990 and the first with widely-respected results since 1956. The 2015 general elections saw a huge voter turnout at 80 percent of the 30 million eligible voters. The NLD won 86 percent of all seats in the Assembly of the Union. Aung San Suu Kyi became the State Counsellor of Myanmar, a newly-created office, and acts as the de facto head of government. (She is legally barred from becoming president because candidate’s’ immediate family members cannot hold foreign citizenship. Her children hold British citizenship – her late spouse was British.)10

The most recent voting in February 2017 was in a by-election which saw 19 seats being contested. The NLD won 9 out of 19 seats, perhaps a signifier of their reduced popularity after being elected to office.11

Myanmar uses the first-past-the-post (FPTP) electoral system where representatives are chosen from single-member constituencies.12 The FPTP system is also known as a relative majority system and it applies to elections in Myanmar’s national parliament, as well as to elections in states/regions. Under this system, the candidate with the highest number of votes in a given constituency wins the seat.

The Constitution and election laws state that a person is eligible to vote if he or she:

Myanmar’s election laws state that the following persons are not eligible to vote:

The Union Election Committee is a state-sanctioned commission set up in 2010 to ensure the fairness of all elections. It is made up of a body of people unaffiliated to any political party.

The UEC’s members are appointed by the government, and must meet the following qualifications:

Criticisms of the UEC include its dependence on the government and its subsequent loss of impartiality and its questionable ability to challenge elections in areas of conflict.

Reservations for the Military

Parties represented in the Amytha Hluttaw (Upper House) and Pyithu Hluttaw (Lower House), and the number of seats each party has are shown below.16 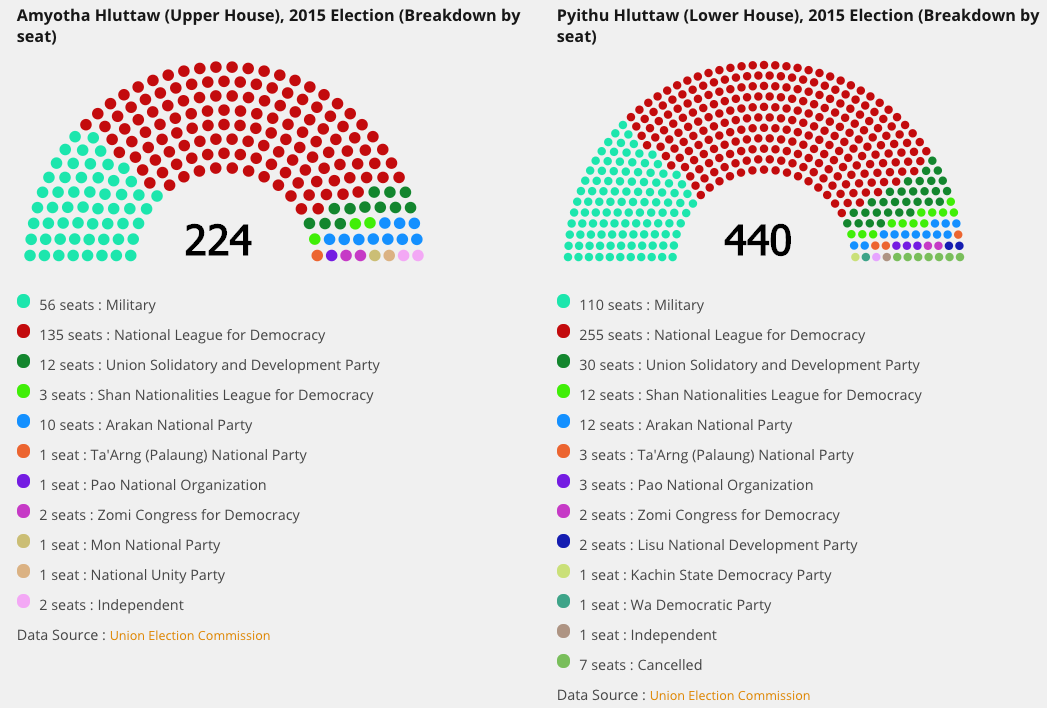