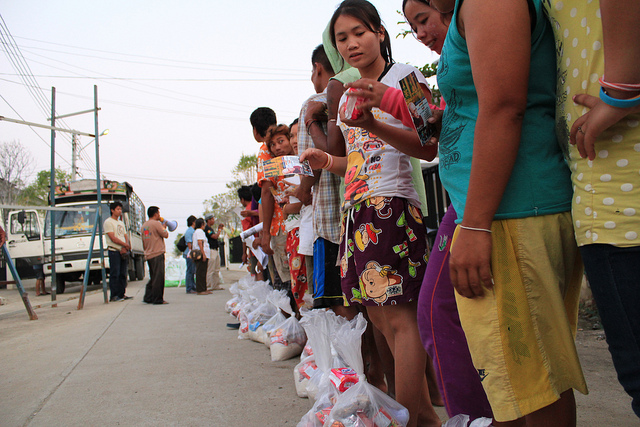 Migrant workers from Laos and Myanmar line up to collect donations after the 2011 floods. Photo by ILO in Asia and the Pacific, Flickr, taken 25 November 2011. Licensed under CC BY-NC-ND 2.0.

Migration between Myanmar and the other states of the Greater Mekong Sub region (GMS)1 has been occurring over hundreds of years, often in an informal, unregulated form.2

Myanmar’s 2014 Census shows that 53 percent of all people who moved from their previous place of usual residence within Myanmar were female. The main reason for movement for both sexes was “following family” and “employment/seeking employment.” Females were more likely to follow family than males at 49 percent versus 32 percent; and males migrated more for reasons of employment than females with 47 percent versus 23 percent. 3

By contrast, migration between Myanmar’s states is relatively low. Indeed, very little has changed since the 1973 census when comparing the proportion of the total population living in each state. Yangon has seen the biggest increase; however, as it now accounts for 14.3 percent of the population, up from 11 percent in 1973. This inward migration to Yangon underscores its importance as the commercial centre of Myanmar.4

53 per cent of people changed their usual place of residence due to the movement of their family. The third important reason was marriage. Most of the people moved to Yangon for employment purposes.6

Twenty five percent of those who have migrated within Myanmar changed their place of residence due to employment purposes — to seek work or begin a new position based in Yangon.

The 2014 Myanmar population and housing census found that over 2 million people from Myanmar are living abroad, 76.8 percent of whom are residing in Thailand. The next most popular destination is Malaysia at 7.4 percent, followed by Singapore with 5.1 percent. There are a higher proportion of females among Burmese people  living in Thailand, while there is a greater proportion of male Burmese migrants in Malaysia.1

About 1.7 million, or 83 percent of those living outside Myanmar are between the ages of 15 and 39  and up to 1.1 million in this age bracket are male.7

Myanmar’s high cross-border migration flows into Thailand are explained by a combina­tion of political, social and economic “push and pull’’ factors. The main driving factor behind these migrant flows is economic, with most of migrants moving to Thailand in search of jobs and high­er wages. A study by Asian Research Center for Migration (ARCM), for example, found that out of a sample of 100 migrants, almost 80 percent reported their main reason to migrate was unemployment at home. However, Myanmar’s political and social conflict and large number of internally displaced persons (IDPs), especially ethnic minorities, have also played an important role in both fostering and shaping migration flows. 8

Almost all Burmese nationals living overseas have migrated for employment purposes — 98 percent of the total. . Out of these 98 per cent, 74 percent are searching for a job and 23.4 per cent of them went to begin a job they had already been awarded. The next most important reason for moving overseas  is following moving family members, which accounts for 1 percent.9